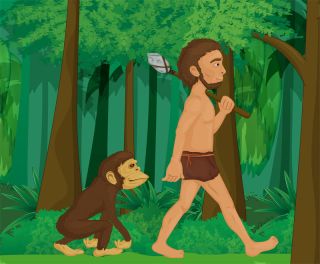 Humans are acquiring genetic mutations at a slower rate than expected, suggesting we split from our common ancestor with chimpanzees longer ago than once thought.
(Image: © © Dannyphoto80 | Dreamstime.com)

Humans might be evolving slower than scientists had thought, according to a new analysis of the genomes of two families, but there is a huge variance between people.

The researchers, reporting their findings June 12 in the journal Nature Genetics, based their measurement of evolution speed on the number of new mutations that occur during one generation in each of the families. A slower mutation rate means we probably separated from chimpanzees evolutionarily longer ago than previously thought, the researchers say, adding that the finding may have medical implications, if some groups of people are more mutation-prone than others.

"This makes us think about what are the underlying mechanisms of these mutations, other than just a random process," said study researcher Philip Awadalla, of the University of Montreal in Canada. "Why are there differences in the rate or accumulation of mutations in individuals?"

The mutations rate seems to be highly variable, Awadalla said, and could be affected by aging and environmental exposure to toxins, among other factors. [Top 10 Mysteries of the First Humans]

Every person has two copies of each of their genes, one from the mother's egg and the other from the father's sperm. These two copies are quite similar, but have some random differences.

Then, when the person creates sperm (or eggs, if a woman), new changes occur by accident in the resulting copy of the genome that gets passed down to the offspring. By sequencing both the parents' and the child's genome for two families, they could see which mutations were already present and which were new to the offspring.

The researchers found that on average, humans seem to have about 60 new mutations passed down every generation — that's 60 changes out of 6 billion letters, or bases, that make up the genome. Previous methods, which indirectly calculated the rates, overestimated that number to be about 100 to 200, the researchers said.

This means that we are accumulating new genetic mutations — the foundation of evolution — about a third as quickly as previously thought. If this mutation rate has been steady throughout human evolution, it pushes the fork between humans and chimps back 7 million years earlier. Some earlier evidence indicates that chimps may be evolving quicker than humans, though Awadalla said they would like to see how they stack up using this whole-genome sequencing method.

Luckily in the case of the families the researchers studied, the mutations weren't dangerous. Most of them were outside of the genes, in areas of the genome called "non-coding," which don't carry protein-making codes to carry out any function.

Scientists had hypothesized that because men make so many more copies of their genome when they make sperm (hundreds of millions every day), they might be more prone to pass on new mutations. The researchers found that this wasn't completely true. While one of the two families studied had 92 percent of their mutations passed down from the father, the other had only 36 percent.

"We always thought most of the mutations were coming from men," Awadalla told LiveScience. "In one family, there were more mutations in the male, but the next family the male had fewer mutations than the female did — it was very surprising."

The sources of these mutations seem to be diverse. They could be caused by age or other natural factors, since genome copying can get sloppy over time. It could also be due to genetic differences that control the DNA-copying machinery, which could affect the rate at which these mutations occur in different people. It's also possible that exposure to toxins in the environment could impact the mutation rate, Awadalla said.