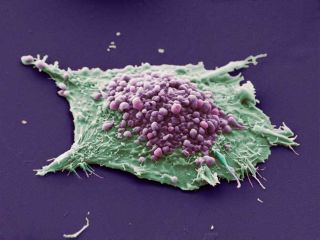 This image shows a single cell grown from a culture of lung epithelial cancer cells. The purple spheres are blebs: irregular bulges where the cell's internal scaffolding - its cytoskeleton - becomes unlinked from the surface membrane. This image received an award from the Wellcome Trust, as part of the annual Wellcome Image Awards, for its ability to communicate the wonder and fascination of science.
(Image: © Anne Weston, Wellcome Images)

Eight new substances have been added to a list of carcinogens by the U.S. Department of Health and Human Services.

The congressionally mandated report identifies substances that are either known to be human carcinogens or are reasonably anticipated to be a human carcinogen. The new additions, announced on June 6, include formaldehyde and aristolochic acids, a family of acids that occur naturally in some plant species, which are now both considered known human carcinogens.

In addition to being used in medical laboratories and mortuaries as a preservative, formaldehyde is widely used to make resins for household items such as composite wood products, paper product coatings, plastics, synthetic fibers and textile finishes.

The six other additions, all of which fall into the second "anticipated" category, include:

"Reducing exposure to cancer-causing agents is something we all want, and the Report on Carcinogens provides important information on substances that pose a cancer risk," Linda Birnbaum, director of both the National Institute of Environmental Health Sciences and the National Toxicology Program, said in a statement.

With these additions, the 12th Report on Carcinogens now includes 240 listings, which can all be found here. Each substance undergoes an extensive evaluation with numerous opportunities for scientific and public input before it is added to the report.

However, even if a substance is listed in the report, it doesn't necessarily mean that it will cause cancer. Many factors influence whether a person will develop cancer, including an individual's susceptibility to a particular substance, and the amount and duration of exposure to the substance.