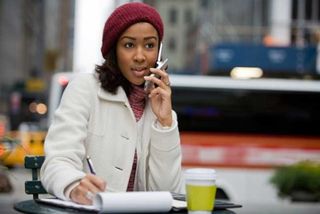 There are theories of how cell phones may cause cancer but studies have yet to find a link.
(Image: © Stockxpert)

Do cell phones cause brain cancer? There's no good reason to think they do.

But if we are to believe the gospel truth delivered by physicists that radio waves from cell phones simply aren't powerful enough to break chemical bonds, the trait of all cancer-causing mutagens, why then do very smart people — smarter than me, for sure — continue to investigate this matter?

The answer lies in the fear of the unknown. Never in the history of humankind have we drenched ourselves so soddenly in electromagnetic radiation. Could it be that we simply cannot envision the risk, that our science blinds us to the truth, much like the way doctors performed surgery unwashed and barehanded 100 years ago?

Well, again, there's no good reason to think so. But here are the reasons nonetheless.

All known cancer-inducing agents — certain chemicals and viruses and ionizing radiation — act by breaking chemical bonds to produce DNA mutations. Ionizing radiation refers to gamma rays, x-rays, most ultraviolet light and certain subatomic particles. Their energy is high enough to detach an electron from an atom.

Lower-energy, non-ionizing radiation from light bulbs and cell phones (both part of the electromagnetic spectrum) can't do damage unless there's enough focus to heat tissue. Even if cell phones could deposit harmful heat, circulating blood should dissipate this.

Still, there's something unsettling about bathing your brain in supposedly innocuous radio waves. So scientists are investigating non-ionizing, non-thermal or weakly thermal effects of radio waves. The theories get sketchy here, though.

One could argue that the cornea can't dissipate heat as well as other body parts; animal studies have found a link between microwaves and cataracts. But most of us generally put the cell phone to our ear, not eyes.

Also, humans might have thermoreceptors, like thylakoids inside plants enabling photosynthesis, that permit radio waves to trigger a cascade of chemical events. What this could mean for human health is anyone's guess; this is just a plausible mechanism should human studies reveal a link between cell phone use and cancer.

Ronald Herberman, director of the University of Pittsburgh Cancer Institute, stunned his colleagues in 2008 with his warning to 3,000 staffers that there are "sufficient data to warrant issuing an advisory... on cell phone use."

Worrying Herberman was the possibility of cancer after ten years of use, as revealed in a 2004 Swedish study of 750 subjects. Also, a 2007 Swedish review found that younger brains might be at a greater cancer risk after extended use.

Yet a larger, longer 2006 Danish study of more than 400,000 subjects found no such link. The 2008 update to the massive 13-country INTERPHONE study also could not resolve a connection. Lifestyle factors of nonstop cell phone use could be the greater influence. Similarly, the reported dizziness and headaches — so called electromagnetic hypersensitivity — might be due to holding an object against your head for an hour and not to any waves going in or out.

People have pointed to the loss of bees as evidence of harmful cell phone radiation. Yet this false alarm was based on a small study that had nothing to do with colony collapse disorder, the known but mysterious culprit behind the decline in bees. Cell phone use never correlated geographically with declining bee populations, which now are rebounding.

Before cell phones it was power lines. "The Great Power-Line Cover-Up" by Paul Brodeur, based on articles he wrote for The New Yorker, helped fuel cancer mania. But like 95 percent of the cat cartoons The New Yorker publishes, those articles were just plain wrong. Billions of dollars were spent disproving the controversy. Yet all you needed to do was look at cancer-free monk parakeets surviving in Brooklyn chiefly from the warmth of nests built on power lines and transmission boxes.

Rare cancers have a way of revealing themselves. Lung cancer is rare outside of smoking, so causation was an open-and-shut case once half the U.S. population lit up. Industrial hazards are similarly identified when clusters of workers contract rare tumors.

No one has gone sterile from microwaves; no one has gotten cancer from their computer monitors. But people do get cancer from the sun's ultraviolet radiation (UV). About two billion people use cell phones, and there's been no spike (yet) in rare head and neck cancers. Caution is prudent, but fear is not.