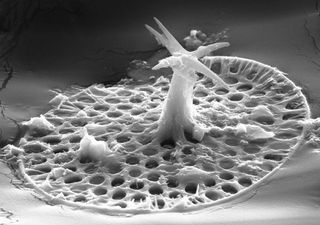 This scanning electron microscopy image reveals the microfossil Characodictyon, which is about 20 microns long, or one-fifth the width of a human hair, and covered in spiny plates.
(Image: © Image Courtesy of Cohen, Macdonald.)

Fossils of tiny creatures living hundreds of millions of years ago may represent the oldest example of an organism with its own mineral coating such as is seen today on snails. The fossils indicate that the simple microorganisms were covered in plates with teethlike spines — an evolutionary feature that puzzles scientists.

The fossils, discovered in the summer of 2007 though not fully examined until now, are detailed this week in the journal Geology. [Image of spiny creature]

The discovery involved rock hammers and a shotgun: Phoebe Cohen, a postdoctoral researcher in MIT's department of earth, atmospheric and planetary sciences, and Francis Macdonald, an assistant professor of geology at Harvard University, set up camp in a remote mountain range along the Alaska-Canada border to examine the rock there. Macdonald had to fire the shotgun to scare off a grizzly bear once during their two-week stay at the site, which was accessible only via helicopter.

After chiseling out of the mountainsides, the duo said, they hauled rocks back to their lab and discovered incredibly well-preserved fossils resembling tiny shieldlike plates.

The plated animals — now identified as belonging to the Characodictyon genus — lived sometime between 717 million and 812 million years ago, a time period in which single-cell organisms thrived just before the first "Snowball Earth" event, when the planet plunged into a deep freeze and became covered in vast ice sheets. Cohen suspects the deep freeze killed off these spiny microorganisms. (On the flip side, at least one recent study suggests the deep freeze spurred the emergence of complex life.)

The plates had patterns similar to those on modern-day coccolithophores — spherical, single-celled algae found in enormous blooms throughout the ocean. These algae produce their mineralized plates within vacuoles (sacs that play a role in digestion and release of waste) and ultimately extrude the plates to the surface to form protective coverings. The researchers think the newly discovered organisms may have formed their spiny coats similarly. [25 Amazing Ancient Beasts]

Exactly why such a complex process evolved in such a simple organism is still a mystery.

"It takes a lot of effort, energy and just sheer biomass to create these," Cohen said of the plates in a statement.

Perhaps, the researchers speculate, the spines and plates helped the small organisms stay afloat. Today coccolithophores reside in the ocean's photic zone, which extends from the surface to just above the depth at which light can no longer reach. And maintaining a "sweet spot" in this zone allows such plankton to grow and thrive — an advantage their ancient counterparts also may have developed, the researchers say.  The plates also may have served as armor, discouraging other creatures that were looking for an easy kill.

"It's a good possibility that these fossil plates functioned in defense against predators," said Susannah Porter, an associate professor of geological sciences at the University of California at Santa Barbara, who was not involved in the research. "This would be significant if true, for it would be some of the earliest evidence for complex food webs that consist not only of primary producers … but also organisms that actively prey on other living organisms." Cohen hopes the results will spur more researchers to examine rocks of the same time period from around the world for similar signs of early complex life.