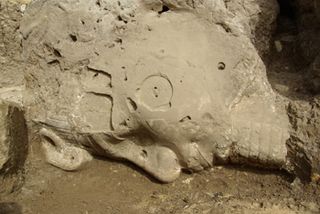 The face of the colossal alabaster statue of Amenhotep III recently found near the third pylon of his funerary temple at Kom el-Hettan.
(Image: © Ministry of State for Antiquities (MSA).)

The second of a pair of fallen statues of King Tut's grandfather has been revealed at the tomb where he was buried, Egypt's antiquities minister announced today (May 31).

It was discovered at Kom el-Hettan, on the west bank of Luxor. The statue is located in the passageway leading to the funerary temple's third gate, or pylon, some 200 meters (656 feet) behind the Colossi of Memnon, which guarded the first gate.

These archaeological discoveries continue to shed light on King Tutankhamen, the boy king who ruled Egypt from 1333 B.C. to 1324 B.C., during the period of ancient Egyptian history known as the New Kingdom. Though Tut is the best-known of the Egyptian pharaohs, many mysteries still exist about his parentage as well as his life and death.

"The statue is the northern one of a pair of colossi that were once placed at the gate of the third pylon," Hawass wrote in his blog. A previous excavation revealed the back of one of the two statues’ thrones.

Both statues probably collapsed during an ancient earthquake, Hawass said, though parts of them were still visible in a layer of sediment. The other parts will be gradually uncovered for conservation, and the statue will stand restored in its original location in the near future.

The statue pair are unique in their well-carved alabaster, according to Hourig Sourouzian, who is mission leader of the Colossi of Memnon and Amenhotep III Temple Conservation Project. The stone, hewn in the quarries of Hatnub in Middle Egypt, was rarely used for such colossal statues. The pair of statues from Kom el-Hettan are the only preserved examples of their size, reaching an estimated height of 59 feet (18 m).

Another statue of Tut's grandfather, this one a depiction in red granite, was reported in October 2010 and showed the king wearing a double crown and seated on a throne next to the Theban god Amun.