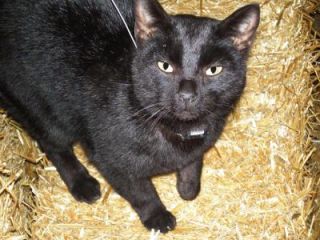 Forty-two cats, including this stray one, were fitted with radio collars and tracked over two years. Some of the collars also had devices that continuously monitored the cats' every move.
(Image: © Illinois Natural History Survey)

Where does your kitty go when you let her out? What do stray cats do all day? Do alley cats hang out with each other?

These are just some of the questions answered by a newly completed research project in which 42 free-roaming cats — some with no owner, some outdoor pets — were radio-collared and tracked for two years by researchers at the University of Illinois.

Together, the cats roamed 6,286 acres in and around the cities of Urbana and Champaign. The strays turned out to have surprisingly huge territories. One feral cat, a mixed breed male, had a home range of 1,351 acres, covering both urban and rural, residential and agricultural, forest and prairie areas.

"That particular male cat was not getting food from humans, to my knowledge, but somehow it survived out there amidst coyotes and foxes," Jeff Horn, a former graduate student in the Department of Natural Resources and Environmental Sciences who led the study, said in a press release. "It crossed every street in the area where it was trapped. (It navigated) stoplights, parking lots. We found it denning under a softball field during a game."

Even though the free-roaming pet cats tended to stay within the two acres surrounding their homes, "some of the cat owners were very surprised to learn that their cats were going that far," Horn said. "That's a lot of backyards." [MAP: See Where the Cats Wandered]

Another difference was that the pets engaged in vigorous activity, such as running or stalking, only 3 percent of the time, while the strays were active 14 percent of the time — they had to work harder to stalk and kill their own food.

Most of the cats tended to stay within 300 meters (984 feet) of human structures, said co-author Nohra Mateus-Pinilla, a wildlife veterinary epidemiologist at the Illinois Natural History Survey at Illinois. "Even feral cats were always within range of a building," she said. "That shows that even though they're feral, they still have a level of dependency on us."

As for whether alley cats hang out together: nope. The researchers observed one feral cat chasing another out of a dairy barn. Another stray waited for a pet cat to emerge each morning and tried to chase it out of its own backyard. In an earlier study, co-author Richard Warner, an emeritus professor of natural resources and environmental sciences, followed about two dozen free-roaming cats over several years, and found that the two leading causes of cat deaths were other cats and disease.

The study was published in the Journal of Wildlife Management.