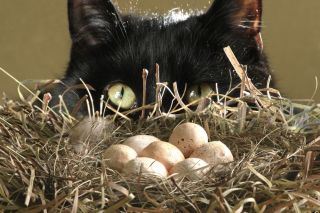 Housecats are a scourge to urban mockingbirds, a new study finds, killing the birds' nestlings and eating their eggs.

While it's no shock to researchers and bird-lovers that roaming cats can wreak havoc on birds, the finding that cats are stalking mockingbird nests came as a surprise.

"I thought the cats probably really hammered them [the birds] when they were fledglings, but when they were in the nests, I didn't really expect the cats to be a huge problem," study researcher Christine Stracey, a former doctoral student at the Florida Museum of Natural History at the University of Florida, said in a statement. "But I was really wrong about that."

Stracey and her colleagues put video cameras on mockingbird nests in both rural and urban areas. They found that in urban areas, cats are the perpetrators of more than 70 percent of nest attacks.

Snakes, crows and swallow-tailed kites also hunted nestlings and eggs in urban areas, the researchers reported in May in the journal Biological Conservation. In rural spots, flying squirrels, opossums, raccoons and blue jays were all threats.

Stracey said the videos couldn't determine for sure whether the cats were pets or strays, though some were wearing collars. The American Bird Conservatory estimates that cats kill hundreds of millions of birds in the United States each year.

The familiar Northern Mockingbird, or Mimus polyglottos, is listed as a species of "least concern" by the International Union for Conservation of Nature, meaning their survival isn't being threatened. Even so, the cat predation is a concern for several reasons.

One, Stracey said, is that there are many other birds in the area whose nests are likely all-you-can-eat buffets for cats.

"We only put cameras on mockingbird nests, but there are a number of species that nest in similar places," said Stracey, who is now a professor at Westminster College in Salt Lake City, Utah. "We don't see any reason why cats wouldn't also eat cardinal nestlings, brown thrashers, towhees – anything else that is nesting in similar locations."

Secondly, understanding mockingbird survival may be important for the conservation of at-risk species.

"Here's this native species that is able to not only live with us, but do really well living with us, and so it represents kind of the opposite of what we normally think about the effects cities have on native birds," Stracey said. "If we can figure out why and how it succeeds, maybe there's ways and things we can do in terms of city planning and management that could promote the success of some of these other native species that aren't doing as well."

Many people deny that cats are urban predators, Amanda Rodewald, a wildlife ecologist at The Ohio State University, said in a statement.

"But this study shows clearly that cats were the dominant predator in this Florida system," said Rodewald, who was not involved in the research. "And that wasn't presumed, it was recorded on video, so it was a fact."

If pet owners want to protect birds, the best thing they can do is keep their cats inside, Stracey said -- especially at night.

"All but one of these cat events occurred at night,” she said. “People should not let their cats roam outdoors at all, but at the very least, keeping them inside at night will cut down on nest predation. Beyond that, we need to think hard about the feral cat problem."