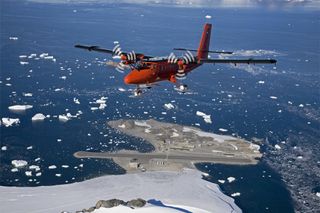 A plane flying above Rothera Research Station, one of nine stations in Antarctica where nonnative species were found among fresh produce.
(Image: © British Antarctic Survey)

It's unforgivingly cold and isolated, but stowaways are arriving in Antarctica in a steady stream. Seeds, fungi and insects go where people -- in this case researchers and tourists -- take them. These arrivals all create the potential for invasive species to establish themselves in the world's most pristine continent and its islands.

"We are still at the stage when Antarctica has fewer than 10 non-native species, none of which have become invasive," said Kevin Hughes, an environmental scientist with the British Antarctic Survey. "Unless we take steps now to minimize the risk of introduction, who knows what will happen."

Invasive species are non-native species that flourish in a new habitat, where they often kick out native organisms and harm human interests by disrupting crops, clogging waterways and causing a myriad of other problems.

Hughes and other researchers have set out to determine just what is being carried unintentionally into some of the international research stations in the Antarctic. In one study, he and others examined more than 11,250 pieces of fresh produce arriving at nine research stations in the Antarctic and the sub-Antarctic islands located farther north in the Southern Ocean to see what came along with it.

The produce, which included everything from apples to pawpaw trees to turnips, was shipped from around the world. Its stowaways were similarly diverse, and included at least 56 invertebrates -- slugs, butterflies, aphids and so on. Twelve percent of the produce carried soil, and 28 percent had rot caused by microbial infection. [Taking a Bite Out of Invasive Species]

"Are these numbers surprising, or does it mean this is likely to be a problem? It’s pretty hard to say," said Daniel Simberloff, a professor at the University of Tennessee, Knoxville, who was not involved with the research. "The upshot is that there's just enough people going to some parts of Antarctica nowadays that lots of organisms are carried there. I have to think this isn't good, and some subset of them are going to pose environmental problems."

This study was part of a larger effort to assess what is actually arriving. In another project, Hughes and colleagues looked at dirt carried in by construction vehicles and found a menagerie of tiny non-natives that included about 40,000 seeds.

"To be quite honest, the only way we are going to stop the introduction of nonnative species is to stop going to Antarctica, to cut off all the pathways," Hughes said. "What we can do is try and minimize the risk of introduction and we can do that by relatively simple steps."

The study includes recommendations that begin with considering where the food comes from, all the way to how to dispose of food waste.

So far, alien species have made little headway on the continent itself. A rare, but limited success came for a tiny fly, the black fungus midge, which has managed to keep a toehold inside Casey Research Station, a British station located on mainland Antarctica. And Kentucky blue grass has also been established on the Antarctic Peninsula, Simberloff said.

The Antarctic islands have received more non-natives than the continent. For instance, another alien grass has been spreading on King George Island, which is just off the peninsula.

But further north, the sub-Antarctic islands have fared much worse, receiving approximately one new species every year since humans began visiting them 200 years ago, according to Hughes.

Invaders may get a helping hand from global warming, which is lessening the severity of the climate, possibly making conditions less harsh.