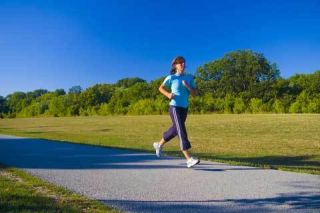 Do you trust the government with your health? The lingering presence of ham in the food pyramid might cause hesitation in your answer. But when it comes to exercise advice, Uncle Sam seems to be onto something right.

According to a new study, following the U.S. federal guidelines on exercise could lower your risk of dying by 27 percent — assuming you trust government scientists analyzing these government data.

The government guidelines recommend at least 75 minutes of vigorous aerobic exercise per week (or 150 minutes of moderate-intensity aerobic exercise, such as walking) and some strength-building exercise twice a week. Not many people take this advice, mind you. Fewer than 15 percent of the 242,000 subjects in the study followed these recommendations.

But those who did — across the board, regardless of age, sex, income, race or even weight — had fewer, if any, chronic illnesses such as diabetes, heart disease or cancer compared to others in their category. [Diet & Exercise Trump Diabetes Drugs]

This analysis comes from the U.S. Centers for Disease Control and Prevention and appears in the May issue of the American Journal of Preventive Medicine.

On one level, the results seem obvious. Buried in the analysis, however, is heartening evidence that even a smidgeon of exercise seems to help in some way, regardless of one's preexisting medical condition. Any incremental increase in exercise translates into better health. The strength of this analysis is the researchers' ability to tease such subtle information from the data.

Similarly, those with an illness who exercised at the government-recommended level saw their risks of dying reduced by almost 50 percent.

This analysis was based on the 1997–2004 National Health Interview Survey. So as with any analysis of cold numbers conducted in an office seven years after the close of a survey, establishing cause and effect is difficult. Could it be that chronic illness led to less exercise and not the other way around?

This might be the case for some study subjects, the authors of the report concede. Yet the analysis of the death rate, or survival probability, of study participants in the immediate years after the survey indicates that those not exercising weren't necessarily close to death or otherwise too incapacitated to exercise. That is, at least for this survey's participants, not exercising appears mostly to be a person's choice, not fate as a result of illness.

Conversely, the surprisingly high number of people with a chronic illness reporting high levels of exercise could be a result of survey exaggeration or just beginning to exercise upon doctor's order after being diagnosed with diabetes or heart disease, for example.

Despite this ambiguity, the bottom line is that if you can move, then move, before it is too late. And those of us who are not healthy, the study shows, have the most to gain.