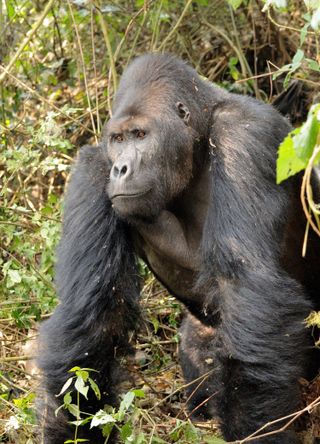 Don't count them out yet. A new census suggests their numbers are rising.
(Image: © WCS.)

A small population of gorillas in the Democratic Republic of Congo not only has survived over the past six turbulent years but has increased, a conservation group announced.

A census conducted late in 2010 in the highland sector of Kahuzi-Biega National Park revealed the presence of 181 individual Grauer's gorillas, compared with 168 detected in the same sector in 2004, according to a team led by the Wildlife Conservation Society.

A "cousin" to the more famous mountain gorilla, the Grauer's gorilla is the largest subspecies of gorilla in the world, with individuals growing up to 500 pounds (227 kilograms). The Grauer's gorilla — also known as the eastern lowland gorilla — is the least known of the four gorilla subspecies, due in large part to the 15 years of unrest in the eastern Democratic Republic of Congo.

The gorilla is listed as endangered on the International Union for Conservation of Nature's Red List and may number fewer than 4,000 in total, according to the WCS. The exact number is hard to pin down because of the human turmoil in their habitats.

"We had several close calls with armed militias during the survey," Deo Kujirakwinja of the WCS said today (April 14). "Thankfully no one was hurt, and our census result is positive news for the conservation community."

The census team surveyed the 230-square-mile highland sector (600 square kilometers) of the park. The lowland sector has been largely inaccessible to researchers due to the frequent presence of militias. Census teams counted nests — gorillas make a nest each night — and the size of dung piles to estimate the total number of gorillas in the area. (The size of dung piles indicates how many adults, juveniles, and baby gorillas are in a group.) The results were a nice surprise.

"Given the insecurity that has been present here for so long, we were not sure what we would find," said Radar Nshuli, the park warden for Kahuzi-Biega. "We were very happy to see that all the efforts that our staff and partners have been taking are leading to a growth in the population."

The WCS has been monitoring the region's gorillas since the 1950s. The number of Grauer's gorillas in Kahuzi-Biega National Park climbed from 223 in the 1970s to 250 in the early 1990s. They crashed to 130 in 2000, following the outbreak of civil war in the region.

The census team is hopeful that the gorillas' success story is even bigger than it documented. The team was unable to survey the entire highland sector, so there could be more gorillas in the park. The team plans to return to these areas.