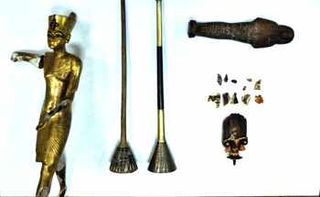 The four objects that were returned to the Egyptian Museum.
(Image: © Rania Galal)

Four objects missing from the Egyptian Museum since the January Revolution have been returned, according to Zahi Hawass, secretary general of the Supreme Council of Antiquities, on his blog today.

The missing items had been stolen during protests on the streets of Cairo. Some protests outside the Egyptian Museum in Cairo February actually centered around Hawass' handling of a Jan. 28 museum break-in. Hawass originally said that no artifacts had been stolen, only later to announce that 18 items, including some belonging to King Tutankhamen, were missing.

That included the gilded wooden statue of Tutankhamun standing in a boat throwing a harpoon, which was one of the four returned objects. The statue suffered slight damage, Hawass wrote, with a small part of the crown and pieces of the legs missing. The figure will be restored and reunited with its boat, which is still in the museum.

The second returned object is one of the 10 missing funerary figurines (called shabtis) of Yuya and Tjuya (parents of the great Queen Tiye and great-grandparents of Tutankhamun). The figures are in good condition, and will be on display again immediately, according to Tarek El-Awady, director of the Egyptian Museum.

The other two objects included: a gilded bronze and wooden trumpet of Tutankhamun, which was in excellent condition, Hawass said; and part of King Tut's fan. Part of the royal fan is still missing.