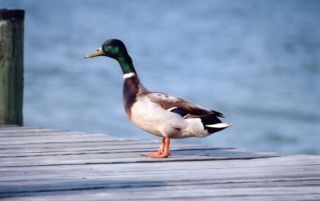 Looking for an STD-free mate? Check the color of their bill (if you're a mallard duck, that is). Researchers have found that the brighter a mallard's bill, the more effective their sperm is at killing off bacteria.

"Under the assumption that bacteria can hurt sperm, it's logical to think that males that have a better capability to kill that bacteria might suffer less of that bacterially educed sperm damage," said Melissah Rowe, of the University of Oslo, in Norway. "Females might be able to avoid a sexually transmitted pathogen and identify males with better sperm."

The duck's bill color, which can range from a drab olive green to a bright, raincoat yellow, is a sexually selected characteristic, meaning females prefer males with brighter bills, making these traits more likely to be passed on to offspring. They go for these brighter bills, scientists think, because the color somehow signals a potential mate's fitness, or ability to produce healthy offspring.

"Researchers have shown that sexually selected traits can be associated with health, with sperm quality, and with parenting ability," Rowe told LiveScience. "A female choosing a male for the more colorful bill has some fitness benefit, more or higher quality offspring. If she didn't get that benefit the preference for that quality wouldn't evolve."

Previous work showed that bill color is also correlated with the speed of sperm and a generally better ability to fight off infections. The bill's color is created by carotenoids, the more of these pigments, the brighter the bill color.

To figure out if bill color, and the underlying carotenoids, are related to semen's antibacterial functions Rowe and her colleagues tested the semen of a group of ducks. They measured how effectively the semen was at killing the bacteria E. coli and S. aureus. They then compared the results to the brightness of the ducks' bills.

They found that the brighter the bill color, the better the duck's semen was at killing the bacteria E. coli, though the results for S. aureus didn't match up with bill color. They aren't sure what part of the semen gives it these antibacterial properties, and identifying these factors is Rowe's next project.

E. coli is commonly found in feces. In the duck, it's often found in the reproductive tract because the duck's cloaca (opening to such regions as the reproductive tract) is a collection spot for both the digestive and reproductive systems. Researchers aren't sure what effect the bacteria might have on either partner, but in humans E. coli is known to be detrimental to sperm quality and viability.

Interestingly, even though the semen could kill the second bacteria they tested, S. aureus, this effect wasn't associated with bill coloration. The two antibacterial properties seem to be mitigated by different proteins, or S. aureus might not be as big a threat to the ducks.

Sexually transmitted bacteria can have negative effects on both duck partners. The bacteria can harm the male's sperm, making it less viable, and it can also sicken the female, making her less likely to be able to take care of her offspring, though the specific effects of E. coli on mallard ducks is unknown.

"A male that has lots of bacteria may be less able to produce high-quality sperm and father offspring," Rowe said. "A male that has a good ability to kill bacteria in the ejaculate might be able to defend sperm from these bacteria and might not have the same decline in quality that other males have."

Because the ducks were bred in captivity, it's possible their sexually selected traits could have been changed by a lack of the pressures of living in the wild, Aldo Poiani, of Monash University in Victoria, Australia, told LiveScience in an email. For instance, ducks don't have to contend with the diseases and predators that make life in the wild difficult.

The sample was relatively small as well, Poiani, who wasn't involved in the study, said, but, "it is a nice piece of work."

The study is published today (April 12) in the journal Biology Letters.