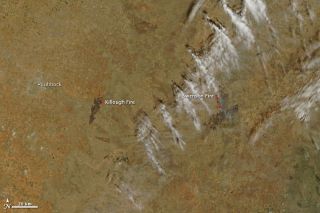 The weather in Texas is fuel for a fire — literally.

Wildfire weather conditions over the weekend were among the worst in the state's history. Dry grass and dry air, along with hot temperatures and howling winds, are fueling the sprawling natural disasters currently affecting the state, according to the Texas Forest Service. One of the state's biggest blazes, a 71,000-acre burn near the town of Swenson, was spotted by a NASA satellite, not far from the National Weather Service office in Lubbock.

"Friday, you could actually see it from a good 50 miles away," said Jerald Meadows, a meteorologist with the National Weather Service in Lubbock. "That was when it was really hot and really burning a lot."

Things have started to cool off, but these wildfires could go down as some of the worst in the state's history. The 2006 Texas wildfire season is generally regarded as the state's worst. That year, 11 people were killed and 400 homes were destroyed. No one has died so far this year.

West, Central and North Texas are stuck in a "fire pattern" — a mix of weather conditions that are fueling the big burns, Meadows told OurAmazingPlanet.

In West Texas, for example, last year's rain triggered heavy grass growth. But that was last year. The grass has since dried and is fuel on the ground. That's because the air is also dry. Low humidity across the area has kept the ground dry, allowing the fire to burn more readily. What provided the spark that started the fires is still under investigation.

In the air, steep drops in pressure have created howling winds of up to 35 mph (56 kph) and gusts up to 50 mph (80 kph). These strong winds push the fire faster than normal.

It's also hot, even by Texas standards. This time of year, average temperatures of 70 degrees Fahrenheit (21 degrees Celsius) are normal, but it's been in the 90s (around 32 C) across the region.

"When the winds push over that hot area that's typically a red flag for us," Meadows said.

A cold front pushed through yesterday and helped firefighters control the spread of the fires. The huge fire in Swenson is now 25 percent contained, according to the Texas Forest Service.

Thunderstorms are forecast to roll in by the weekend and they could give some relief. But they're not a cure-all.

"Even with thunderstorms, when we're in dry conditions, the lightning can start fires," Meadows said.