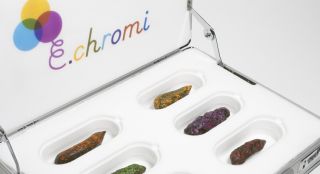 Parents have long divined their child's health by reading the contents of toilets. But future humans who spot brightly colored poo could take it as a warning from genetically-engineered bacteria in their gut that they should go see a doctor.

Such a colorful scenario comes from the scientists and designers of E.Chromi, according to Co.Design. They transformed ordinary E. coli bacteria into biosensors that could change color in the presence of certain chemicals – perhaps water pollutants or chemical signals related to certain diseases.

That opens up all sorts of future possibilities. E.Chromi envisions humans gulping down special probiotic yogurt containing their bacteria in 2039. The bacteria could then colonize the gut and serve as frontline sentinels for human health and future medicine.

E.Chromi's open secret comes from using standardized DNA sequences, called BioBricks, which allow the bacteria to create colors such as red, yellow, green, blue, brown or violet. Other genes helped create a sensitivity tuner that tells the bacteria when to change color.

Such efforts won the Grand Prize at the 2009 International Genetically Engineered Machine Competition (iGEM). Since then, the original team from Cambridge University in the UK has joined with designers Alexandra Daisy Ginsberg and James King to explore the possibilities of their technology.

The open-source work for such designer organisms is included in the iGEM database hosted by MIT. It's just one example of a growing synthetic biology movement that aims to make or redesign living organisms with human-created genetic code not found in nature.

If E.Chromi can make the application a reality, health surveillance at home could become as easy as going through the usual morning routine.