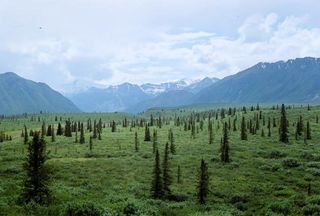 This photo of the Arctic tundra is a good example of treeline advance; all of the trees in this image date to the period of rapid establishment(1925-1950).
(Image: © University of Alberta)

Rising temperatures fueled by global warming are causing forests of spruce trees to invade Arctic tundra faster than scientists originally thought, evicting and endangering the species that dwell there and only there, a new study concludes.

Tundra is land area where tree growth is inhibited by low temperatures and a short growing season. In the Arctic, the tundra is dominated by permafrost, a layer of permanently frozen subsoil.

The only vegetation that can grow in such conditions are grasses, mosses and lichens. Forests of spruce trees and shrubs neighbor these tundra areas, and the boundary where they meet is called the treeline.

In summer, the permafrost thaws, and the tundra becomes covered in bogs and lakes, allowing a unique habitat for plants. Climate change, meanwhile, has extended the summer warming season and promoted tree growth, causing the treeline to encroach on the tundra.

By looking at tree rings, researchers reconstructed a 300-year history of tree density and treeline position. The results show trees can creep up on the tundra faster than previously thought.

“The conventional thinking on treeline dynamics has been that advances are very slow because conditions are so harsh at these high latitudes and altitudes,” said Ryan Danby of the University of Alberta. “But what our data indicates is that there was an upslope surge of trees in response to warmer temperatures. It’s like it waited until conditions were right and then it decided to get up and run, not just walk.”

While in many places the idea of more trees is a good one, this Arctic takeover endangers species like caribou and sheep that thrive in the tundra, as well as the native people who depend on these species for their survival.

The details of the study are published in the March issue of the Journal of Ecology. Danby plans to continue his research as a part of the International Polar Year research effort.