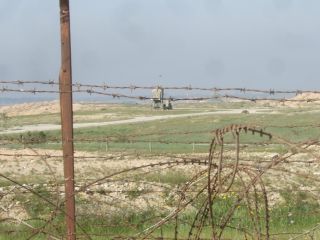 While the rest of the world's Mideast focus has been on the unrest in Libya, Egypt, Syria and Yemen, the decades-long conflict between Israelis and Palestinians has entered a new phase of violence. Israeli and Palestinian forces have resumed trading airstrikes and rocket attacks, leading Israel to deploy its experimental Iron Dome missile defense system for the first time.

Dealing with small targets at short range in short engagements, the Israel Defense Forces designed Iron Dome to work faster than any missile defense system previously developed. The system is designed to shoot missiles at incoming rockets, blowing up both rocket and missile  before the rocket can reach its target. Guided by specially designed radar that assesses the trajectory and threat of the rocket, the system has an effective range of about 43 miles (70 km).

Iron Dome is "a uniquely Israeli solution for a uniquely Israeli problem," said John Pike, director of GlobalSecurity.org and an expert on defense technology and policy. "Nobody else has the problem of being that close to an enemy you can’t annihilate .  Because if it was a stand-up war, and the guy who was shooting at you was only a couple miles away, you would just blow him up, and that would be the end of it. But you can’t do that here.”

Pike added: “It’s got to be basically automated. The opportunity to get a human in the loop to engage the target is pretty limited.”

The system is controversial in Israel, where critics note its extremely high cost and question its basic effectiveness.

The Israeli military began developing the system in response to the numerous rocket attacks launched by Hezbollah during the 2006 war in Lebanon. The system cost $210 million to develop, and began ongoing testing in 2009.

Iron Dome came under criticism last year from Israeli academics and news outlets. Reuven Pedatzur, a military analyst, former fighter pilot and professor of political science at Tel Aviv University, told the Jerusalem Post that the system was both ineffective and disproportionately expensive. Each Iron Dome missile costs between $50,000 and $100,000, compared to the $5 rockets they would stop, Reuven said.

Furthermore, the Israeli newspaper Haaretz reported that the Israel Defense Forces chose to buy the Iron Dome instead of the U.S.-designed anti-rocket laser because of pressure to buy domestic products, and due to the profitability of selling the technology to other countries.

Pedatzur also argued that Iron Dome won't act fast enough to protect the southern Israeli cities that bear the brunt of rocket fire coming from the Gaza Strip. However, Pike told InnovationNewsDaily that many other anti-missile systems do react fast enough to work over the small distances covered by Iron Dome, so the final word on that question is yet to come.

The success or failure of Iron Dome could have ramifications in the United States. A bill to give Israel an additional $205 million to continue paying for the system has passed the House and awaits a vote in the Senate.

The rest of the world also will certainly watch how Iron Dome fares in these deadly tests.