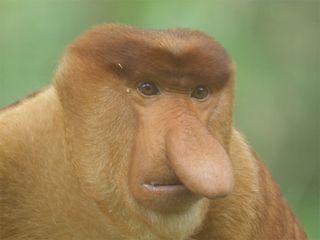 The nose of a male proboscis monkey can exceed 3.9 inches (10 centimeters), and is thought to woo females.
(Image: © © Ikki Matsuda)

The first monkey that acts like a cow has been discovered — one that regurgitates to give its food another chew, just as cattle do.

Cows, goats, sheep and other ruminants chew plants, let their meals soften in their stomachs, and then throw up the larger bits into their mouths to munch on this cud some more. This chewing helps them break down their food and get at all the nutrients within.

Primates such as humans and monkeys seemed to cover the full gamut of all dietary strategies seen in the animal kingdom, save rumination. Now scientists find the proboscis monkey (Nasalis larvatus) on the island of Borneo apparently chews its cud, too.

Investigators used video cameras and binoculars to monitor about 200 proboscis monkeys, which lived off fruit and leaves along a tributary of the Kinabatangan River in Malaysia. These primates get their names from the males' large noses, which are thought to be used in attracting females.

"There are, of course, a lot of mosquitoes and leeches in the forest," researcher Ikki Matsuda, a primatologist at Kyoto University in Japan, told LiveScience. "The rainy season was the worst — the river water came up to our waists even inside the forest."

"It was really scary because at that time, crocodiles also came into the inland forest, and many creatures like centipedes and spiders came up to me on the water," Matsuda added.

The researchers saw 23 monkeys chew their regurgitated food at least once. The monkeys apparently suck in their abdomens and stick out their tongues before they regurgitate, keeping all the cud in their mouths. [Video of Monkeys Chewing Cud]

The scientists continuously observed one adult male for 169 days and watched him chew his cud for 11 days. This rumination usually happened when he spent more time eating, suggesting that regurgitation helps the monkeys deal with more food and possibly helped them eat more.

Gorillas and even people have been known to chew regurgitated food, but this is regarded as pathological behavior — these monkeys, on the other hand, seem to do it as part of their diet.Future research can investigate whether other monkeys, such as langurs, ruminate as well, said researcher Marcus Clauss, a wildlife physiologist at the University of Zurich in Switzerland.

The scientists detailed their findings online March 30 in the journal Biology Letters.