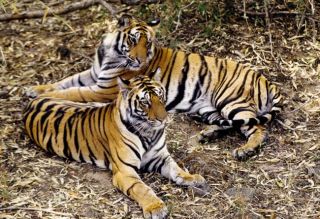 The outlook for tigers, a species that has nearly disappeared from the wild, got a little less dreary today.

New numbers revealed at the start of a tiger conservation conference in India show that the tiger population in the host country is actually on the rise.

Indian officials announced today (Mar. 28) that the country's tiger population has increased by 225 since 2007, the last time a comprehensive population survey was conducted.

Although the number may seem small, it marks a significant increase in India's tiger population, now said to be roughly 1,706 big cats.

The tiger count, conducted by Indian authorities and international conservation organizations, was the largest ever undertaken. Several areas in India were intensively surveyed for the first time, and a number of tigers were discovered living outside of designated tiger reserves and national parks.

"In its detail, this tiger estimation exercise shows the importance India attaches to this prime conservation issue," said Ravi Singh, chief executive of conservation group WWF's India branch. "The results indicate the need to intensify field-based management and intervention to go beyond the present benchmark, bringing more people and partners into the process."

The three-day International Tiger Conservation Conference comes shortly after the launch of the groundbreaking Global Tiger Recovery Program, a worldwide plan to bring the species back from the brink of extinction.

According to some estimates, a mere 3,200 tigers live in the wild in 13 Asian countries. Loss of habitat, poaching and a brisk trade in tiger parts have contributed to a 97 percent decline in tiger populations around the world, down from roughly 100,000 animals at the beginning of the 20th century.

"Recovery requires strong protection of core tiger areas and areas that link them, as well as effective management in the surrounding areas," said Mike Baltzer, head of WWF's Tigers Alive Initiative. "With these two vital conservation ingredients, we can not only halt their decline, but ensure tigers make a strong and lasting comeback."