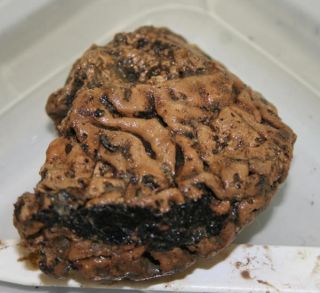 A piece of the preserved Heslington brain after it was removed from the skull in which it was found.
(Image: © York Archaeological Trust)

A 2,500-year-old human skull uncovered in England was less of a surprise than what was in it: the brain. The discovery of the yellowish, crinkly, shrunken brain prompted questions about how such a fragile organ could have survived so long and how frequently this strange type of preservation occurs.

Except for the brain, all of the skull's soft tissue was gone when the skull was pulled from a muddy Iron Age pit where the University of York was planning to expand its Heslington East campus. [Britain's Oldest Brain Found]

"It was just amazing to think that a brain of someone who had died so many thousands of years ago could persist just in wet ground," said Sonia O'Connor, a postdoctoral research fellow at the University of Bradford. O’Connor led a team of researchers who assessed the state of the brain after it was found in 2008 and looked into likely modes of preservation. [Image of preserved brain]

"It's particularly surprising, because if you talk to pathologists who deal with fresh dead bodies they say the first organ to really deteriorate and to basically go to liquid is the brain because of its high fat content," O'Connor said.

When it was found, the skull — which belonged to a man probably between 26 and 45 years old — was accompanied by a jaw and two neck vertebrae, bearing evidence of hanging and then decapitation. Cut marks on the inside of the neck indicate that the head was severed while there was still flesh on the bones, O'Connor said. There is, however, no indication of why he was hanged, and the rest of his remains have yet to be found.

More than a decade earlier, O'Connor was involved in the discovery of 25 preserved brains within medieval-era remains from Kingston-upon-Hull in England. Aside from the brains, only bones remained, and all other soft tissue was gone.

In this regard, the so-called Heslington brain and the medieval remains are quite different from mummies, frozen bodies, or intentionally preserved remains because in these cases other soft tissue — skin, muscles and so on — is preserved as well. None of the recently discovered remains showed any signs that they were intentional preserved.

The Heslington remains, along with others O'Connor has discovered, appear to have been buried quickly after death in wet environments where the absence of oxygen prevented the brain tissue from putrefying. But while the oxygen-free environment seems key, it is not possible to rule out other factors like certain diseases or physiological changes, such as those that accompany starvation, that might predispose the brain to being preserved this way, according to O'Connor.

After being deposited in the water-logged pit, the Heslington brain began to change chemically, developing into a durable material and shrinking to a quarter of its size. The chemical details of the new material are still under investigation, she said.

In a study in an upcoming issue of the Journal of Archaeological Science, O'Connor's team amassed a list of other, similarly preserved brains found since 1960. Reports like these typically fly under the radar and do not appear in the mainstream archaeological science publications, and when archaeologists do discover a preserved brain, they tend to think it is the first of such a find, she said.

"I think part of the problem is archaeologists are very happy to deal with humans' skeletal remains but as soon as there is any hint of soft tissue it is psychologically very, very different. You are no longer dealing with a skeleton, you are dealing with the remains of a corpse and, of course, a corpse is a dead individual," she said.

The skull has been dated to some time between 673 and 482 B.C.; Romans, meanwhile, arrived in the area in A.D. 71, according to Richard Hall, director of archaeology at the York Archaeological Trust, which the university hired to assess the site and handle the excavation in Heslington. This appears to have been a permanent settlement with ditches that divided the area into fields and walled parkways through which cattle could be driven, Hall told LiveScience.

Archaeologists have also found at the site circular features they believe were probably thatched-roof houses, as well as a pond-like feature probably used for water storage, he said.

At this point, the purpose of pits like the one in which the skull was found aren't clear, he said. No other human remains have been found on the site.