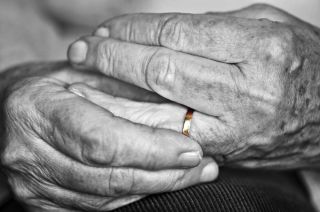 SAN ANTONIO, Texas — Being widowed and never remarrying may raise the risk of dementia and Alzheimer's disease, according to a new study of genealogical data.

The research, presented Saturday (March 19) at the annual meeting of the American Association for Geriatric Psychiatry, found that widowhood nearly doubled the risk of dementia in Utah citizens born between 1895 and 1930. The risk of Alzheimer's disease, the most common form of dementia, was 2.17 times higher in people who had been widowed and never remarried.

The results are preliminary and many questions remain about how other life stressors play a role in dementia, study researcher Maria Norton, a professor of family, consumer and health development at Utah State University, told LiveScience. But research on animals suggests that accumulated stress over the lifetime may speed cell death in the hippocampus, one of the brain's memory centers. That might make the brain more vulnerable to the effects of Alzheimer's disease, Norton said.

The Alzheimer's Association estimates that 5.4 million Americans currently have Alzheimer's disease, which is the sixth-leading cause of death in the United States. The disease is marked by memory loss, disorientation and behavior changes. No one knows why Alzheimer's develops, but abnormal protein deposits called plaques and tangles seem to play a role in killing brain cells. [10 Ways to Keep Your Mind Sharp]

Norton and her colleagues received a three-year grant from the National Institutes of Health to research how life experiences might play a role in the development of Alzheimer's and other dementias. As part of the project, the researchers turned to the Utah Population Database, a detailed genealogical record of births, marriages and deaths in Utah.

They pulled biographical data from people born in the late 1800s and early 1900s and divided the subjects into an array of categories reflecting complicated relationship histories: married and stayed married, married and divorced without remarrying, married and widowed without remarrying. They also looked at people with multiple marriages, dividing them into categories based on whether any of those marriages had ended in widowhood or if they'd ended in divorce.

After controlling for age, gender, education and presence of the APOE e4 gene variant, which is known to contribute to Alzheimer's, the researchers found that multiple marital changes, especially widowhood, put people at elevated risk of developing dementia later. The highest risk for dementia was among those who had married once, become widowed and never remarried. The least likely people to get dementia were those who stayed married and were not widowed, and those who got married, got divorced and stayed single.

A single divorce probably doesn't increase dementia risk because the marriage itself was likely stressful and getting out was a relief, Norton said. On the other hand, widowhood can cause major life stress.

For the surviving spouse, "this was something that wasn't a conscious choice," Norton said.

The researchers are now refining their study to look at the timing of life stresses. Whether you're widowed at age 25 versus 75 might make a difference in later risk, Norton said. So might other factors like depression or the death of a child. (Depression has already been implicated as a risk factor for Alzheimer's.) The idea, Norton said, is to figure out which stressors put people at the most risk so doctors can develop treatments and programs to ease the anxiety early on, before dementia hits.