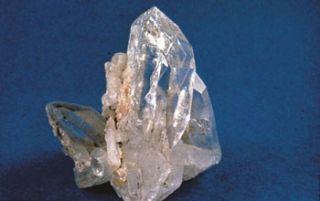 Quartz is the weakest mineral in continental rocks.
(Image: © USGS)

Quartz might help solve a mystery as to why Earth's continents repeatedly deform in some areas but not others, scientists find.

Areas loaded with the common fragile mineral apparently make up persistent zones of weakness in the Earth's crust. These findings might one day help shed light on the inner workings of the puzzling quakes that rupture in the middle of continents.

The unifying theory of plate tectonics revolutionized our understanding of the planet by shedding light on how continents split, move and combine. However, enigmas remained, such as precisely why continents repeatedly formed mountain belts and rift zones at the same locations but not others across great spans of time.

It was evident that such continental deformation zones are weaker than neighboring, undeformed areas. Now scientists have found a key clue regarding the origin of this weakness.

"It all begins with quartz," said researcher Anthony Lowry, a geophysicist at Utah State University.

Quartz is the weakest mineral in continental rocks, and the second most common.

"If you've ever traveled westward from the Midwest's Great Plains toward the Rocky Mountains, you may have wondered why the flat plains suddenly rise into steep peaks at a particular spot," Lowry said. "It turns out that the crust beneath the plains has almost no quartz in it, whereas the Rockies are very quartz-rich."

To reach these conclusions, the researchers analyzed the properties of rocks across the western United States with the aid of the Earthscope Transportable Array of seismic stations. This network helped the researchers estimate the thickness of continental crust in the American West and revealed how quickly sound waves and shear waves travel through the crust, offering clues to its temperature and composition.

The scientists then combined these Earthscope findings with other sets of geophysical data to, for the first time, separate the distinct effects that water, temperature and quartz had in the crust.

"Over the last few decades, we've learned that high temperatures, water and abundant quartz are all critical factors in making rocks flow more easily," Lowry said. "Until now, we haven't had the tools to measure these factors and answer long-standing questions."

They found that belts of weak, quartz-rich rock in the lower crust matched up well with zones of recent continental deformation, acting much like jelly in a sandwich made up of the upper crust and mantle. They suggest that once the flow of rock starts in these areas, it brings heat with it, which forces surrounding rocks to release water otherwise chemically bound in crystals. This added heat and water causes further weakening and deformation of the crust.

"This intriguing study provides new insights into the processes driving large-scale continental deformation and dynamics," said Greg Anderson, National Science Foundation program director for EarthScope, who did not take part in this study. "These are key to understanding the assembly and evolution of continents."

If the researchers confirm their analyses really are imaging variations in levels of quartz, their method could help shed light on continental activity of all kinds, including as-yet perplexing types. For instance, while scientists have a strong understanding of how earthquakes work at faults where tectonic plates meet and clash with one another, quakes in the middle of continents are still obscure, such as ones in the New Madrid zone that endangers parts of Illinois, Indiana, Missouri, Tennessee, Arkansas, Mississippi and Kentucky.

"We have a history of earthquake activity in the 1800s in the New Madrid region in the middle of the United States, and if we see any anomalies in the compositions of rocks below there, that might explain why that region activates, even if we don't see any obvious surface evidence of big faults," Lowry told OurAmazingPlanet.

Lowry and his colleague Marta Pérez-Gussinyé detailed their findings in the March 17 issue of the journal Nature.