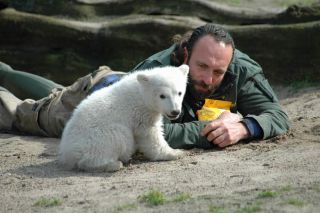 Polar bear Knut with his zookeeper Thomas Doerflein (who had died in 2008) on the day of the first public appearance of the little bear in March 2007.
(Image: © © Markwaters | Dreamstime.com)

Likely one of the only zoo animals to grace the cover of Vanity Fair, the hand-raised Knut polar bear reportedly died Saturday (Mar. 19) at the Berlin Zoo.

The bear, born in captivity on Dec. 5, 2006, became a sensation after he was rejected by his mother and so hand-raised by zookeeper Thomas Dorflein, who died of a heart attack in 2008.

The cause of Knut’s death is not yet clear, reports say, though hundreds of zoo visitors apparently saw the polar bear wade into the water in his enclosure before having a short spasm and then dying, according to the Associated Press.

At 4, Knut was still somewhat of a babe, as male polar bears don’t reach maturity until 10 or 11 years of age.

The oldest polar bear in captivity, Debby, was euthanized in November 2008 at age 42 at the Assiniboine Park Zoo in Winnipeg in Canada. She was losing weight and had multiple organ failure, giving no hope of recovery, Robert Wrigley, a curator at the zoo, said in a statement at the time.

The second oldest polar bear in captivity in North America, Snowball, died at age 37 in October 2008 at the Cleveland Metroparks Zoo.

Ptolemy II, the king of ancient Egypt from 285 B.C. to 246 B.C., is thought to have kept a polar bear in his private zoo in Alexandria – considered the earliest known captive polar bear, according to Polar Bears International. Romans also likely kept polar bears.

About 20,000 to 25,000 polar bears are estimated to exist in the wild, according to the IUCN. Globally, the polar bear is considered "vulnerable" by the IUCN, a designation assigned in 2005, based on the likelihood of a more than 30-percent decline in the total global polar bear population within the following 35 to 50 years.

The animal was listed as a threatened (defined as a species likely to become endangered in the foreseeable future) in 2008 under the Endangered Species Act due to shrinking sea ice – the animals' key habitat. Alaska, the one U.S. area where polar bears live, is embroiled in a battle with the federal government and conservation groups over this status, with one congressman introducing a bill to strip the bear of its threatened status.

As for Knut, a postmortem examination is expected Monday to try to figure out the cause of death, according to the AP.