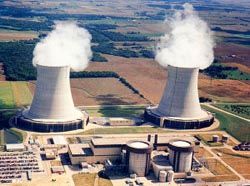 Q: How might the failure of a nuclear power plant's cooling system result in a meltdown?

A: A nuclear reactor-core meltdown implies that the reactor-core initially composed of solid nuclear fuel rods has become molten because of overheating due to the loss of adequate cooling. Full meltdown is preceded by a complete uncovering of the reactor-core resulting from evaporation of coolant. During the process of core melting, the fuel cladding (tube), which contains the fuel and provides the first barrier to radioactive fission product release, overheats and oxidizes by interacting with cooling water, resulting in hydrogen gas production. The hydrogen under certain conditions might combust. At very high temperature, which develops from the lack of adequate cooling, the cladding could melt. In the case of full meltdown, the molten fuel would penetrate and/or interact with the molten cladding. The fuel and cladding might also form a molten mass of material. [Infographic: What Is a Nuclear Meltdown?] Q: Can a nuclear meltdown be stopped or reversed?

A: The boiling water reactors similar to the Japan reactors have redundant emergency core cooling systems to prevent the core meltdown, including emergency diesel generators and batteries to provide power to the pumps in the event of external power loss. In the Japan reactors, all external power to the station was lost when the seawater swept away the power lines. The diesel generators also appear to have ceased functioning due to the tsunami induced damage, and the backup batteries were consumed after a few hours. This is the likely progression of the apparent partial core meltdown. Re-stabilizing core cooling with water is the only way to stop further core melting. If adequate cooling is re-established at a partial core melting state, the reactor damage and additional discharge of fuel radioactivity content to the environment could be limited. This is why the operators of the Japan reactors are making all attempts to provide water for cooling the reactors.   Q: What is a partial nuclear meltdown?

A: This is similar to the meltdown case above, except that only a partial fraction of the core (upper-part) has become uncovered and melted due to limited cooling. Its impact is likely less. Q: How is this event in Japan different from the Chernobyl accident?

A: The two events are different. First of all, the Japan reactors shut-down and the power level was reduced immediately to the decay power level (about 6-8 percent of the normal operating power) when the earthquake first hit, whereas the Chernobyl reactor failed to shut down and its power was increasing, due to the progression of that accident. Furthermore, the reactors in Japan have a containment structure while the Chernobyl reactor did not have such a structure. This structure provides a valuable confinement of radioactivity in the event of gaseous discharge or reactor vessel rupture that would result in the release of radioactive material into the atmosphere, as happened in Chernobyl. So this capability is a tremendous advantage for a reactor design with containment. Additionally, there is no possibility of a graphite fire in Japan, as in the Chernobyl case, since graphite is not a construction material in the Japanese reactors.

Furthermore, the Chernobyl accident was caused by an explosion inside the reactor itself, which distributed a significant fraction of radioactive material upwards into the air where they formed a plume that covered a large fraction of Europe. The dispersal was made worse by the lack of a containment structure. In the Japan case, radiation releases have resulted from slow degradation and release of radioactive materials from the reactor fuel due to the lack of cooling. This lack of cooling is due to the combined effects of the earthquake and follow-on tsunami that have completely wiped out electrical power (both normal and emergency backup diesel generators) for days at these plants. This is called a station blackout. The electricity is needed to run water pumps to cool the cores. Unlike the explosion inside the core itself at Chernobyl, there have been some hydrogen explosions at the Japan plants, but these have been outside the containment and appear not have damaged the reactors or the reactor containments. Finally, there have been some controlled radiation leaks from the plant in the form of radioactivity in steam that was vented to keep the containment from over-pressurizing, as opposed to the uncontrolled release at Chernobyl. The amount of radiation (radioactivity) released from the Japan plants is a very small fraction of that released from Chernobyl. Q: What's the worst that could happen at one of the Japan nuclear facilities?

A: The worst thing that could happen is that reactor containment could fail, leading to additional release of radioactivity into the environment. This could occur if they were not able to cool the fuel and enough steam pressure is built-up in the containment to rupture it. At this time the extent of the impact that this would have has diminished since many of the fission products have already undergone radioactive decay and so even if the containment did fail, there would be less of an impact on the surrounding area.