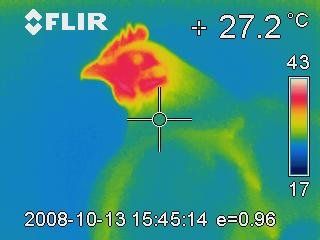 A worried mother is often called a mother hen, and new research is showing how true this expression may be. When her chicks are in distress, a hen will react physically, showing empathy.

"It's very fascinating to find out about the emotional lives of animals, but also it's highly relevant for animal welfare," said researcher Joanne Edgar of the University of Bristol, in southern England. The finding is important in farming or laboratory situations, where birds and other animals are often exposed to the pain and distress of their co-habitants in tight quarters. If they feel empathy toward their injured coop-mates, they could be put under extra stress.

To simulate this stress, the researchers exposed hens and chicks to puffs of air (as from a keyboard-cleaning canister), causing the birds mild distress without harm or pain.

The hens, which were separated from the chicks but could see, smell and hear them, paid more attention to their surroundings when the puff of air was directed at them. But when it was directed at their chicks, the mama birds responded more intensely with a stress response equivalent to fight-or-flight behavior: The hens' heart rates increased and their external temperatures changed (even though the chicks weren't making distress calls, ruling out the possibility that this was a protective-mom response).

They also emitted a "maternal vocalization" call, which is used to call their chicks back to them, Edgar told LiveScience. "It also enhances memory formation of the chicks. Then they know what to do in these circumstances if it ever arises again," she said.

Primatologist Frans de Waal of Emory University, who wasn't involved in the study, called the findings very interesting. "Not only is the mother hen emotionally affected, she also starts calling, which seems an 'other-oriented' response. She is trying to change the situation," de Waal said.

Edgar said she is currently studying whether this same reaction happens in response to other adult chickens, and seeing what actions the hens might be reacting to. Also, the team is seeing whether this reaction could be called an emotion, by determining if it can be classified as an "adverse" or protective reaction by the hen.

Most empathy studies in animals have been conducted in mammals, assuming that such a response evolved with parental care of children, an obligate behavior in mammals. This new study, along with others, suggests empathy might have evolved from an older common ancestor – possibly a reptile, de Waal told LiveScience in an e-mail. Empathy could be over 200 million years old, he wrote.