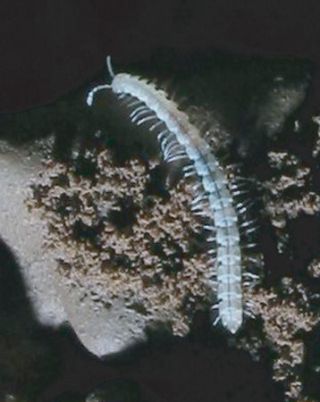 Two albino millipedes have come out of their cavernous hiding places to represent an entirely new genus of these leggy organisms.

Scientists spotted the millipedes in caves on opposite sides of the Grand Canyon. One species was found in a cave on the South Rim and the other in two caves on the North Rim.

"We knew the millipedes likely represented two distinct species because the two populations were separated by the Grand Canyon," said biologist J. Judson Wynne, a cave expert at Northern Arizona University who also works for the U.S. Geological Survey. "The fact these two species belong to an entirely new genus was a great surprise to us."

Wynne made the discovery with Kyle Voyles, a cave expert with the Bureau of Land Management.

A genus is a major subdivision within a family of living things that typically includes more than one species.

Before they ever ended up in the caves, these millipedes were ready for a life of constant darkness, high humidity and scarce food. They lack functional eyes, which would be useless in the blackout conditions, and have no pigment since there is no need for protection from the sun's rays. Instead the cave critters have lots of legs and feelers for finding the rare speck of food washed into the cave from above.

Thousands of years ago, when northern Arizona was warmer and wetter, millipedes basked in moist leaf litter. But as temperatures changed, they sought refuge in caves, where the subterranean realm provided stable climate conditions. Now they are restricted to this environment.

The eighth pair of legs on the millipedes are called gonopods. These modified legs are not for walking but rather transfer packets of sperm to the females during mating. William Shear at Hampden-Sydney College in Virgina, found the gonopods were distinct and similar only to these two new species.

The discovery of the North Rim species [image] will result in the two home caves becoming listed as "significant" under the Federal Cave Resource Protection Act of 1988.

During their field research to make an inventory of cave life, the scientists have explored 30 caves in northern Arizona. In addition to the new millipede species, they have discovered new species of spider, barklouse (Psocoptera), beetle, and possibly two springtails (Collembola). Plus, they found a new genus of cave cricket (Family Rhaphidophoridae).

There's still more to uncover, the scientists say. "With 170 known caves [along a strip of land in Arizona's BLM], there is no doubt that there is more to find. The research we have conducted here is just the tip of the proverbial iceberg," Voyles said.

The new millipede genus will be named after ecologist John Prather of Northern Arizona University, who passed away last year.