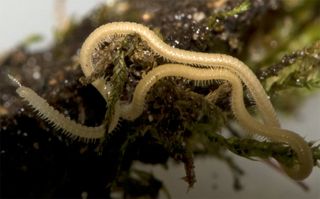 A rudimentary fused mouth with no known function is among the millipede's oddities, as are hairs on its back that produce a silklike product. "There was this huge amount of neat detail that we're just scraping the surface of," Marek said.
(Image: © Paul Marek)

She is all legs and after 27 years, she is showing not one but 666 of her rarely seen limbs.

After years of searching, scientists have rediscovered Illacme plenipes, a millipede that is the world's leggiest creature, in a tiny patch of San Benito County, Calif.

This type of millipede was first discovered in 1926.

The word millipede literally means a thousand feet. In reality, no millipede has so many. The I. plenipes, however, comes closest, with the females possessing up to 750 legs based on previous finds.

She wears the pants

Over the course of three trips to the California Floristic Province, scientists found four male specimens and three females, which they report in the June 8 issue of the journal Nature.

The females, as in turned out, were not only longer at about 1.3 inches, but also had up to 666 legs. The males averaged 0.6 inches in length and walked on no more than 402 legs.

The males and females probably start out at the same size. Females grow larger and develop more body segments, explained the report's co-author Paul Marek of East Carolina University. "They are also wider."

It isn't known if the females have accelerated growth or just keep growing once the males have stopped.

On a track to find “the acme of plentiful feet,” Marek and colleagues used topographical maps, original descriptions of where this species had been cited, and the knowledge of potential suitable habitats for these arthropods.

They ended up spotting some in a hotspot of biodiversity that covers less than half a square mile.

Some 34 biodiversity hotspots have been identified on the planet. They cover only 2.3 percent of the land's surface but shelter more than 50 percent of plant species and 42 percent of all terrestrial vertebrate species.