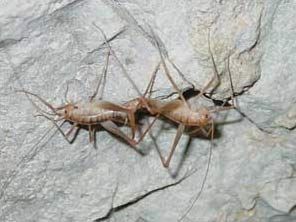 In a rare type of discovery, researchers have identified a whole new genus of cricket in caves in Grand Canyon-Parashant National Monument in northwestern Arizona.

The new genus has yet to be named. It was identified by cricket expert Theodore Cohn of San Diego State University.

Most crickets have a pair of non-clasping cerci at their hind ends. Earwigs have cerci, which are commonly known as pinchers. The newfound genus has cerci that do clasp, Wynne said in a telephone interview.

The plate that covers its reproductive zone is also unlike any known on other crickets, he said.

Cave crickets tend to sleep and reproduce in the cave but go outside to feed at night. It is not known if the newfound critters live that way, but Wynne suspects they do, having found them during the day near the cave entrance in semi-darkness.

"I don't think there's enough food there to support the crickets," he said. "I think they come out to feed."

The finding suggests there's a lot more to discover in Southwest caves.

Of more than 1,000 known caves in Arizona, only 3 percent have been significantly surveyed by biologists.

"Cave ecosystems are one of the most poorly understood and fragile ecosystems," Wynne said. "The discovery of a new cricket genus from a northwestern Arizona cave emphasizes how little is known about these ecosystems."

A genus is a major subdivision within a family of living things that typically includes more than one species. The newfound crickets belong to the Rhaphidophoridae family, which is within the order called Orthoptera. This order also includes grasshoppers.

Neil Cobb, curator of the Colorado Plateau Museum of Arthropod Biodiversity, said the discovery of a new genus in such a well-known order in North America is rare.

"Caves are one of the final frontiers in temperate regions for discovering new taxa," Cobb said today. "Because caves are extreme environments, cave arthropods are very specialized and possibly endemic to a single cave system or region. They present interesting and odd evolutionary forms that reflect the extreme environments found in caves."