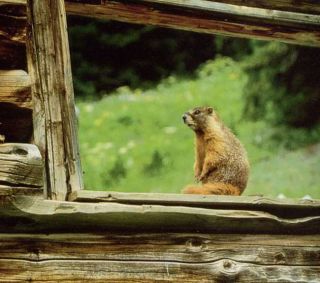 Punxsutawney Phil will be pulled from his caged slumber tomorrow to do his faux forecasting duty, but most groundhogs in the wild will sleep through to spring to finish their winter’s hibernation, a seasonal behavior that is key to their long-term survival.

However, with this year’s warm winter, which some experts pin on global warming, biologists say groundhogs and their hibernating brethren might rise closer and closer to Groundhog Day each year as Earth's climate changes.

The balmy weather could snap awake groundhogs and other hibernating animals too early this year, well before their breakfasts are ready and threatening their survival.

In response to the harsh conditions of winter, some animals hibernate—a state of reduced activity which slows breathing and lowers body temperature and metabolic rate.  Hibernation, also called torpor, allows animals to conserve energy when food is scarce.

“There’s less food around in the winter months, so there’s less energy available and you have to work harder to find it,” said Hannah V. Carey, a researcher at the University of Wisconsin. “Plus, for animals that hibernate in the cold regions there’s a higher energy demand because when it’s colder it takes more energy to maintain your internal body temperature.”

The risk for early risers

Once the chilly season rolls in, leptin—a protein hormone that regulates appetite and metabolism—signals a pause in food intake during hibernation. But as temperatures start to rise, leptin production goes down and stimulates the appetite of the slumbering animals. Unlike the passive mechanism of going into hibernation, which takes little energy, coming out of hibernation requires groundhogs [image] and other sleepers to increase their metabolic rate.

The higher metabolic rate associated with coming out of hibernation is very energy expensive, especially if it happens prematurely.

First off, a "waking" animal, such as a groundhog, has to start shivering its muscles, which takes a lot of energy, said Terry L. Root, a researcher from Stanford University.  Additionally it has to start up processes associated with metabolism.

Animals use stored fat as the fuel for coming out of hibernation, Root explained. That gets used up when the animal wakes up.  If there’s nothing out there to eat, they return to torpor. The second time they wake up, the fat is all gone and animals must resort to using their muscles as fuel, “and that’s very, very harmful,” she said.

Another potential problem facing early risers is predators, according to David W. Inouye, a biologist from the University of Maryland, who along with colleagues in Colorado has kept tabs on marmots, the technical term for groundhogs, in recent decades.

In Colorado, marmots tend to go into hibernation at the end of August and wake up In April, they burrow through the snow and determine whether  it's time to wake up or whether it’s still winter and they should hole up some more .

“If they come out of hibernation when there’s only that one hole through the snow—that they dug—where they can run back when they escape from predators, their options are much more limited than if they had come out later in the year or during the summer where they had multiple holes that they could run to if there’s a predator,” Inouye told LiveScience.

In the Midwest, warmer temperatures are also expected to raise the metabolic rate of the 13-lined ground squirrel—a hibernator that burrows underground, according to the American Physiological Society.,

Rising temperatures can and do arouse animals and plants prematurely from their deep snoozes, and another problem related to this is that not everyone wakes up at the same rate.

The synchrony that animals and plants have evolved to rely on is breaking down because species are responding at different rates to the changing environment, Inouye said.  Or they’re responding to different cues. Some are responding to snow pack, while others could be responding to temperature.  The groundhog may be awakened by the raising air temperature, but the alfalfa that they eat may not be budding because the ground is still covered in snow.

But are these earlier wakeup calls a manifestation of a warming climate or due to some other mechanism?

“We’re pretty convinced that this is connected to climate change,” Inouye said. “If the cue that marmots use to decide whether or not to go back into hibernation in April is air temperature and we know because of temperature records that one of the consequences of global warming is supposed to be rising air temperatures, then it seems like it’s a pretty easy link to make.”

Root also agrees that hibernation cycles are tied up within our complex ecosystem, with the climate acting as a major driver.

"Hibernation is shortening and it’s responding to warmth," Root said. "And the warmth is caused by humans. It has to do with our dumping carbon dioxide and methane and things like that into the atmosphere and using the atmosphere as a free sewer, basically. I have no doubt."

Punxsutawney Phil [image] is a great folk story and sparked a classic movie in 1993 starring Bill Murray. But groundhogs, also known as woodchucks, actually can emerge from hibernation during a warm spell at any time of the year, said Doug Inkley, wildlife biologist with the National Wildlife Federation.

“The fact of the matter is there’s nothing inherent in woodchuck behavior that says that they’re going to come out on February second, or that what happens on February second is going to be any indication of an early end of winter," Inkley said.

Other Effects on Animals