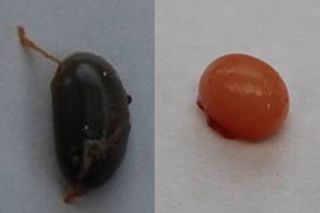 These findings could explain why such inky testicles are mysteriously found throughout the animal kingdom.

Scientists focused on the pigment melanin, which gives human skin its color. Curiously, researchers have also seen melanin in the testes of a variety of species in all vertebrate groups. However, why this pigment is there and what it might do was unknown.

Melanin is also an antioxidant that can protect the body against reactive oxygen species, harmful compounds that can damage DNA. As such, scientists reasoned that melanin in testicles might guard against genetic mutations in sperm. [New Test Reveals Good vs. Bad Sperm]

Evolutionary biologist Ismael Galván at the University of Paris-Sud in France and his colleagues studied 134 species of birds, concentrating on mutation rates in their mitochondria, which help cells respire oxygen and which possess their own DNA. Sperm need a lot of oxygen, and any mutations in mitochondria could hamper sperm and thus hobble a bird's chances at reproduction.

The researchers found the 42 species of birds with testicles darkened by melanin, such as owls and thrushes, had relatively higher mutation rates in their mitochondria than the 92 other birds without inky testes. They also discovered that melanin was most often seen in testicles during the breeding seasons of birds, when sperm was likely generated. There was no link seen between darkness of plumage and darkness of testicles.

"Melanins are present in all organisms, from bacteria to mammals -- they are the most common animal pigments," Galván told LiveScience. "These results suggest that the evolution of melanin-based traits may be related to the genome."

"Our findings may be well applied to other animal groups," Galván added. "Our study opens new and exciting questions for future research."

If melanin does have this protective effect, one question that comes to mind is why melanin is not found in all testicles.

"We hypothesize that this is because of the costs of producing melanin, which may mean that the only animals that melanize their testes are those that really need it because of their high mutation rates," Galván said.

The scientists detailed their findings online Feb. 10 in the Journal of Evolutionary Biology.