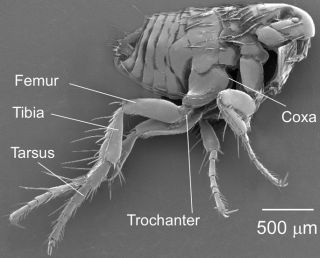 The leg anatomy of a flea
(Image: © Gregory Sutton)

Fleas perform an amazing feat when they jump, and the mechanics behind the tiny, bloodsucking pests' acrobatics have been studied -- and debated -- for a long time. But new research may have settled one major question: How do fleas lift themselves off the ground?

It turns out the tiny insects push off the ground using their shins and feet.

"It's been known fleas are incredible jumpers for 1,000 years," said Gregory Sutton, a research fellow at the University of Cambridge in England. "If you see fleas in your hand and you see them jump and you realize how small they are, it doesn't take much to realize these guys are catapulting themselves huge numbers of body lengths," said Sutton, who along with a colleague completed this most recent study of the mechanics of a flea's jump, an athletic effort that catapults the fleas 50 to 100 times their body length.

One mystery solved, another remains

Fleas jump more quickly and with more force than would be possible using muscle. This mystery was solved in 1967, when researcher Henry Bennet-Clark discovered that the fleas, using an elastic pad made of a protein called resilin like a tensed spring, release the pad to catapult themselves into the air.

But this discovery gave rise to another debate that remained unresolved: How did the fleas transfer the force from the spring mechanism to the ground to lift off? Bennet-Clark believed a flea pushed down through its tibia and tarsus (equivalent to a human shin and foot or toe, respectively). Meanwhile, fellow flea researcher Miriam Rothschild believed that fleas pushed off using their trochantera (equivalent to human knees).

Before fleas take off on a jump, their knees appear to rest on the ground, creating an important sticking point in the debate.

With the aid of the cameras, the researchers filmed the fleas jumping 51 times. In 45 of those jumps, the fleas' feet and knees were on the ground when the flea pushed off. However, in the remaining six, the knees were both clear of the ground at that time, indicating they did not transfer the force of the jump to the ground. In all of the jumps, the feet touched the ground.

Pictures taken through the microscope revealed that spiny gripping structures — which come in handy while bracing during lift off — covered the fleas' feet and shins. The knees, meanwhile, were smooth. And finally, the researchers used computer models to run simulations of both jumping theories. Here, too, evidence supported the lower-leg push-off theory.

"We pretty much discounted the hypothesis that force is going through the knee," Sutton said. Their work appears in today's (Feb. 10) issue of the Journal of Experimental Biology.

This doesn't mean there aren't more mysterious aspects to flea jumping ripe for exploration. The team plans to look at how the fleas control their jumps.

"We never observed any time when one leg would extend without the other one, so we want to figure how the fleas do that," Sutton said, explaining, "there doesn't appear to be any mechanical connection between them, but they fire off at exactly the same time."