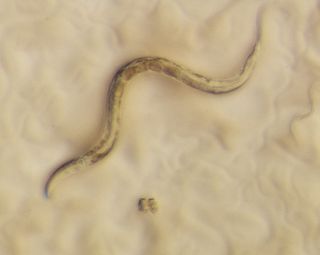 Scientists have discovered that C. elegans, a microscopic worm biologists have used in the lab to identify important biological phenomena, suffers from natural viral infections. This may mean that C. elegans can help scientists learn more about how hosts and viruses interact.
(Image: © Marie-Anne Felix, the Monod Institute)

The worms in microbiologist Marie-Anne Felix's lab are feeling a little under the weather. It seems they've picked up a stomach virus. The virus is actually the first ever found to infect the nematode C. elegans, a carefully studied worm that scientists use for basic research.

Studying the sick worms will teach researchers how viruses interact with their hosts — which, in some cases such as HIV and influenza, are humans.

While viruses — unique forms of life that cannot grow or reproduce outside a host cell — infect everything from bacteria to plants and mammals, researchers had been unable to find any that infected this nematode.

"Prior efforts didn't look with the right tools and didn't look in the right place," study researcher David Wang, a microbiologist at Washington University School of Medicine in St. Louis, told LiveScience. "We have a combination of expertise." Felix is a worm specialist, and Wang, a virus hunter.

C. elegans is one of the most studied organisms on the planet (and even off the planet). Researchers have sequenced its genome and documented the development of each of its cells. They can turn on and off most of its genes at will, through a process called RNA interference (or RNAi).

This interference process also happens naturally in many organisms. Some, like plants and fruit flies, use RNAi to fight off viruses. In these organisms, the RNAi can turn off the genes of the invading virus, stopping it in its tracks.

Studying how the newly discovered virus interacts with such an essential RNAi model system as the nematode could shed light on how RNAi is used in humans, Wang said. "This has the potential to teach us something fundamentally new about how organisms respond to viral infections," he said. "There might be parallel pathways in humans."

Felix, of the Jacques Monod institute in Paris, found the virus in sick worms she had collected from rotting apples and grapes. She could tell the worms were sick, but they didn't get better after a course of antibiotics. She was able to infect other C. elegans worms with a mix from mashed-up infected worms that had been filtered to remove anything larger than a virus (about 20 nanometers, or the width of a very thin human hair). Even after being filtered, the liquid could make worms sick.

Felix asked Wang to try to identify the virus that made it through the filter. He found that it was a type called Nodaviridae, which infect insects and fish, though it is only about 40 percent similar to previously known nodaviruses. The virus, and its closely related cousin the team discovered was infecting the nematode C. briggsae, might even be a completely new family, Wang said.

The virus easily infects the wild worms, though once they did they only caused changes in the gut cells. The worms still lived long and seemingly happy lives, although with fewer offspring.

The commonly used lab strain of C. elegans was less susceptible to the virus, but another strain, which is RNAi-deficient, was more susceptible.

Because of this, it seems likely the worms use RNAi in the same anti-viral way that Drosophila and plants do. Because the C. elegans is such a well-defined model system, researchers can see which genes make the worm more or less susceptible to its viral invaders.

"It adds an approach to the repertoire of tools that researchers can use to understand virus-host interactions" in humans, Wang said.

Dennis Kim, a researcher who studies bacterial infections of C. elegans at MIT, noted in an e-mail to LiveScience that the system "will provide insights into the ecology and evolution of host-virus interactions." Kim was not involved in the current study.

Wang agreed, but noted that studying host-virus interactions in C. elegans "has the limitations of a model organism, in that we might find things that are only applicable to the model." Still, he said, most of the fundamental processes of viral infection should be similar in humans.

The paper was published today (Jan. 25) in the journal PLoS Biology.