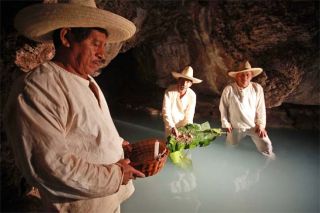 Zoque villagers staging the release of barbasco paste on a leaf, as done during an annual religious ceremony. The baskets traditionally are used to scoop anesthetized ﬁsh from the water.
(Image: © Mona Lisa Productions.)

Deep in a sulfur cave in southern Mexico, a group of indigenous people have for centuries asked their gods for bountiful rain by stunning the cave's fish with a natural plant toxin. Once the fish have succumbed, the Zoque people scoop them into baskets for eating. Now scientists are finding the ancient religious practice is impacting the fish's evolution.

Those fish that are resistant to the anesthesia survive to pass on their genes, while the others simply meet their demise.

The religious ceremony is held in the sulfur cave Cueva del Azufre each year at the end of the dry season during the holy week before Easter. The Zoque grind up the toxic, carrot-shaped roots of the tropical barbasco plant and mix them with lime to form a paste, which they wrap in leaves. They place the bundles about 110 yards (100 meters) into the cave to poison its waters and anesthetize fish, which the Zoque believe are gifts from gods that inhabit the underworld. The collected fish supplement the meals of the Zoque until crops are ready for harvest.

"We actually got to eat some of these cave fish," said researcher Michael Tobler, an evolutionary ecologist at Oklahoma State University. "They're not very good, by the way."

How some fish survive

Tobler and his colleagues were in the area investigating cave-dwelling specimens of the small, guppy-sized Atlantic molly (Poecilia mexicana), to figure out how these fish made their way from the surface all the way underground. And once in the dark reaches of the cave, Tobler wondered how they survived in the cave system despite the presence of toxic hydrogen sulfide there.

"We learned about the ceremony, and actually attended it in 2007," Tobler recalled. "The families each take a certain amount of the fish home. The way we had ours prepared was that they were just mixed with scrambled eggs, although I hear other families fry them. They had a funny salty taste to them, although I'm not sure if that's because of their sulfuric environment, or something the cook messed up."

To see whether this ceremony influenced the evolution of these fish, the researchers collected specimens from the annually poisoned waters as well as areas upstream that hadn't been affected by the ritual. They next placed barbasco root toxin into tanks holding the fish.

Fish exposed to the annual ritual indeed proved more resistant to the toxin than fish that lived elsewhere, able to swim in poisoned waters for roughly 50 percent longer. As such, the poison from the ceremony apparently has over time helped select fish that can tolerate it — fish that cannot get captured and killed by the Zoque.

"What is most exciting to me is that we were really able to find these connections between the natural world and culture, to find that over generations, the local community actually affected the evolutionary trajectory of this population of fish," Tobler told LiveScience.

The local government has now actually banned the ceremony, because they felt it might pose a danger to the cave fish.

"It's very important that the cave and these fish are protected, but I think it's also very important that the local people can live with these ceremonies they inherited from their ancestors," Tobler said. "We see our role as learning more about the actual impact of these ceremonies, to see if we can develop recommendations for the Zoque and the local government as to what a sustainable way to continuing this ceremony might be."

The scientists detailed their findings online Sept. 8 in the journal Biology Letters.