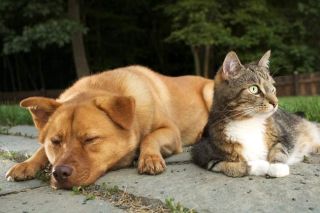 Dogs and cats are a lurking household danger, according to a new report showing the pets cause all kinds of injuries related to falls. The pet trips — estimated at more than 80,000 a year — occurred while people were chasing after them, stepping over them, breaking up a Fido fight, and other scenarios.

Dogs are the biggest hazard. Those injured noted various circumstances for their injuries, including: "tripped while crossing the street with their dog," "fainted while training her dog," and "walking dog and fell up steps," among other circumstances.

The researchers don't suggest you send your four-legged resident packing.

"Certainly pets are wonderful and have many benefits, so we're not saying anything about not having pets," said study researcher Judy Stevens, a senior epidemiologist at the Centers for Disease Control and Prevention, National Center for Injury Prevention and Control.

The results come from a nationally representative sample of emergency department visits to about 60 hospitals from Jan. 1, 2001 to Dec. 31, 2006, finding some 7,456 records were linked to pet-related falls. [Graphic shows breakdown of injuries and circumstances by pet.]

From this, the researchers calculated the national estimate would reach 86,629 for fall injuries associated with cats and dogs in the United States in 2006. Though an alarming number, it's just 1 percent of the 8 million fall injuries treated in emergency departments, Stevens said.

Even though cats are known to follow at your heels, or right beneath your feet, dogs were involved in nearly 7.5 times as many injuries as cats.

That's "mainly because dogs are bigger and stronger, and we do see children and women are most likely to be involved in a fall with a dog," Stevens said, adding that women and children are on average smaller and weaker and so more likely to get pushed or pulled.

In fact, gals were more than twice as likely as men to have pet-related fall injuries. And children and the middle-age group were the most likely to end up in the ER after an accident with the fur balls.

More than a quarter of dog-related injuries happened while people were walking the pet, with the most frequent circumstances falling or tripping over one's dog (31 percent of cases) and being pushed or pulled by the four-legged friends.

As cats are mostly homebodies, it's no surprise most falls involving the bossy felines (nearly 86 percent) occurred in or around the house. Nearly 12 percent of these injuries happened while people were chasing cats.

In 2006, about 43 million U.S. households owned dogs and 37.5 million households had cats. Nearly 64 percent of households with pets had more than one pet, according to the American Veterinary Medical Association.

With so many furry residents, falls are bound to happen. But Stevens offers tips for reducing the risk:

The findings are detailed in the current issue of the Journal of Safety Research.