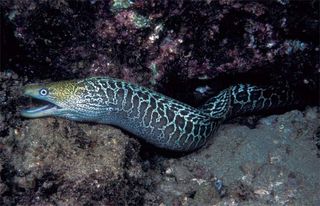 The undulated moray sports a pattern of light undulating lines and speckles on a dark green background, with a snout that is often yellow. The slender fish can reach between 3 to 5 feet in length.
(Image: © John E. Randall, Bishop Museum.)

Moray eels, the slender fish that inspired the movie "Alien," are turning out to be odder than what's on the surface. New research suggests the 150-plus eel species feed on the same fish and have similar genetics.

The finding puts a wrench in how scientists thought species came to be, with one mechanism including geographic isolation. Essentially, an underwater mountain, say, keeps organisms from intermixing and over thousands to millions of years new species emerge.

But the larval form of moray eels lives for up to two years in the open ocean and prevents the animals from becoming geographically isolated. Instead, these relatively weak swimmers get dispersed far and wide on ocean undulations. The result: Eels get dispersed throughout oceans.

The cosmopolitan results are based on two species of eels in the Indo-Pacific that spans tropical waters of parts of the Indian and Pacific Oceans, and the authors say that they would expect this pattern to be more of a rule than an exception in morays.

Researchers from the Hawaii Institute of Marine Biology and Washington University in Saint Louis captured 289 moray eels from two species, the undulated moray (Gymnothorax undulatus) and the yellow-edged moray (G. flavimarginatus), at 15 locations in the Indo-Pacific basin.

A researcher examined the contents of morays' stomachs and found they had eaten the same fish.That puzzled the scientists, who know it's difficult to make a living if you're competing with lots of others for the same meal.

"I personally still find it strange that so many species (dozens and dozens) can be found to prey on the same species of reef fish in the same place at the same time," lead author Joshua Reece, a biology student at Washington University in St. Louis, told LiveScience. Based on genetic testing, the researchers found that the species in various places across the ocean had similar hereditary material.

"You would expect that they depend on different food items or breed at different times," said Reece. "We don't know a whole lot about moray eels, but we know that they fill similar niches."

As adults, moray eels don't move from their reef, whether they survive in warm, shallow waters, or cool, deeper waters, so they don't swim from one place to another. How then, the researchers asked, did the same moray species exist on different reefs in completely different locations? They tested the prediction that the long-lived larvae lead to widespread gene flow and distribution.

"Morays have larvae that can exist in the open ocean for several months to up to two years. In that sense we did expect lots of gene flow, lots of connectivity, and this study confirmed that. The moray larvae can swim better and faster than most other larvae," said Reece.

In this form, the larvae drift on ocean currents, adjusting their buoyancy to move up and down like an elevator.

"These larvae are among the simplest, long-lived, and self-sustaining vertebrate forms. They are transparent except for eye pigmentation, and the body wall may be only a few cells thick," Reece writes in the journal article.

Other reef fish like soldierfishes, pygmy angelfishes, and unicornfishes also have pelagic larvae, but even these fish show genetic isolation based on their location. The researchers credit the life span of the moray larvae for the prevalence of the various species.

"They end up being able to disperse from one reef to another when those reefs are separated by very large geographic region. There's a lot of diversity in their genetics, but there's nothing about that diversity that's geographically structured," Reece said.

The results turn the theory of diversification on its head in this case, said Reece. "Morays are the first reef fishes known to be genetically homogeneous across the entire Indo-Pacific."

He plans to continue studying the vicious eels to answer more questions that came out of the research, like how the different species came to exist in Earth's salty seas.

The results are detailed in the April 7 online issue of the Journal of Heredity.