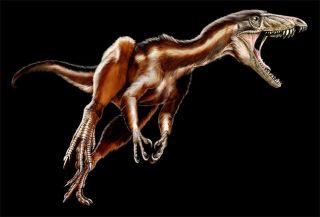 Long, long ago, some of the first dinosaurs walked the Earth. But scientists have not known with any confidence where those initial dino prints were made. Much more recently, hikers stumbled across a few bits of bone at Ghost Ranch in New Mexico, leading to the discovery of a game-changing dinosaur that reveals where it all began.

The dinosaur, now called Tawa hallae, had a body that was only the size of a medium to large dog, but its remains have helped scientists shore up where dinosaurs came from. The research team used the extremely well-preserved and complete skeletal remains as a means to fitting the newbie and other early dinosaurs onto the evolutionary tree.

"[The results] showed a lot of the South American dinosaurs in the Triassic were the most primitive dinosaurs we have found to date," said lead researcher Sterling Nesbitt of the University of Texas at Austin. "They are closest to the common ancestor of all dinosaurs." (Nesbitt was at the American Museum of Natural History in New York when he made the discovery.)

The upshot: The earliest dinosaurs originated and diverged in what is now South America before trekking across the globe more than 220 million years ago when the continents were assembled into one gargantuan landmass called Pangea.

Nesbitt and his colleagues describe the dinosaur in the Dec. 11 issue of the journal Science. Their analyses suggest T. hallae lived some 213 million years ago and was a primitive theropod (mostly carnivorous dinosaur that walked on two legs). Like Velociraptor, the dinosaur was likely covered with feather-like structures and sported claws and serrated teeth for snagging prey.

After the hikers stumbled upon the dinosaur quarry in 2004, scientists excavated the area in northern New Mexico. They uncovered five to seven partial skeletons belonging to T. hallae species buried together in a relatively small pocket among a jumble of tens of thousands of other fossils.

The excavated skeletons suggest this species had a snout-to-tail tip length of about 6 to 13 feet (2 to 4 meters), with a hip height of 3 to 5 feet (1 to 1.5 meters). The bones suggested that when alive, T. hallae was equipped with air sacs surrounding its neck and braincase — features found in birds today.

To find out how T. hallae was related to other early theropods and how the animal came to its North American resting place, the researchers compared T. hallae with other dinosaurs.

"If you have continents splitting apart, you get isolation," Nesbitt said. "So when barriers develop, you would expect that multiple carnivorous dinosaurs in a region should represent a closely related endemic radiation. But that is what we don't see in early dinosaur evolution."

Rather, in the Ghost Ranch sediments they found three carnivorous dinosaur species, including T. hallae, that were only distantly related.

"This implies that each carnivorous dinosaur species descended from a separate lineage before arriving in [the part of Pangea that is now] North America, instead of all evolving from a local ancestor," said study researcher Randall Irmis of the Utah Museum of Natural History and the University of Utah.

That wouldn't be surprising, since the giants were free to roam at the time. "[Dinosaurs] could essentially walk from pretty far south in the Southern Hemisphere to pretty far north in the Northern Hemisphere," Nesbitt told LiveScience.

The team then looked at a variety of reptile groups to see if other animals were wandering across the still-connected continents during the Late Triassic period (about 225 million years ago). And just like the early theropods, such reptiles were indeed making multiple trips between what are now North and South America, the researchers speculate.

This free movement of animals at the time means there were no physical barriers, such as large mountain ranges, hemming dinosaurs and others in to certain parts of Pangea. But this presents a seeming paradox. "We wondered," Irmis said, "if reptiles, including dinosaurs, were able to freely move around Pangea during the Late Triassic, then why aren't there any sauropodomorph and ornithischian dinosaurs in North America during the Triassic?"

They think the answer is climate. For some reason, only the carnivorous dinosaurs found temperatures in North America to be hospitable, the researchers suggest.