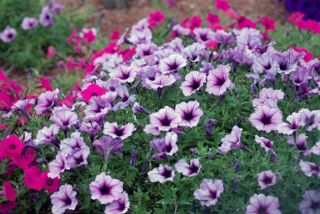 Indeed, carnivorous behavior may be far more widespread in plants than commonly thought — if we take a closer look, botanists said.

At least six different kinds of killer plants have been recognized since the time of Darwin, such as Venus flytraps, which snares insects between its jaw-like leaves, and pitcher plants, which capture victims in slippery pits. These plants apparently target animals to supplement their growth in harsh, nutrient-poor habitats.

Many other plants, some quite common, have also been suggested as potential carnivores over the years that have failed to gain wide acceptance as such thus far. Petunias and potatoes, for instance, have sticky hairs that trap insects, and several species of campion flowers have the common name catchfly for the same reason.

"We may be surrounded by many more murderous plants than we think," said botanist Mark Chase, Keeper of the Jodrell Laboratory at the Royal Botanic Gardens at Kew in England.

Chase and his colleagues reviewed all the research so far on carnivorous plants. A number of plants might actually be carnivorous, they noted, but merely go about their murderous business in a subtler manner than their more conspicuous cousins.

For instance, the cross-leaved heath (Erica tetralix) is not typically considered a carnivorous plant, but this pink flower possesses sticky, adhesive glands and dwells in poor soils. Also, while carnivorous seeds might be a strange concept, those of the shepherd’s purse (Capsella bursa-pastoris) possesses a sticky layer with chemicals that can attract, kill and digest victims.

"Although a man-eating tree is fictional, many commonly grown plants may turn out to be cryptic carnivores, at least by absorbing through their roots the breakdown products of the animals that they ensnare," Chase said.

The reason why most of these plants are not generally thought of as carnivores is because they have not been found capable of digesting what they entrap as more obvious carnivorous plants do. Still, because roots can readily absorb nutrients released from decaying corpses, nearly all plants are capable of carnivory, Chase and his colleagues assert.

"In almost every habitat, the nitrogen and phosphorus that animal bodies can provide are limiting factors for growth, and even a minimal amount of carnivory can reap some benefit," Chase told LiveScience.

Although Chase feels there is more than just circumstantial evidence that demonstrates how widespread carnivorous plants are, to prove the point, researchers can dose insects with mildly radioactive nutrients. Scientists can then track such molecules to see if the plants are really absorbing them, which would show they are benefiting from killing prey.

"What plants are doing is much more sophisticated than we ever imagined," Chase said. "Although animals are eating plants, plants are also eating animals. It's not just a one-way street."

The scientists detailed their analysis December 4 in the Botanical Journal of the Linnean Society.