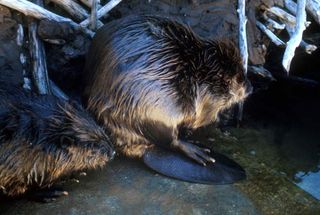 A busy beaver's dam work is felt downstream in a major way, a new study suggests.

Beavers are well known for creating large pond-like areas upstream from their dams, but scientists have found that the construction projects also spread water downstream with the efficiency of a massive once-every-200-years flood.

Researchers spent three years in the Rocky Mountain National Park examining downstream valley ecosystems in the Colorado River. They found that beaver dams force water out of the natural stream channel and spread it across and down the valley for hundreds of yards.

Dams also change the direction of groundwater movement. Instead of flowing down the center of a valley, dammed water infiltrates river banks and flows underground toward the sides of the valley. This raises the water table to sustain plant and animal life during the dry summer season.

"We found that upstream ponds were not the main hydrologic effect of the [beaver] dams in the Colorado River valley," said study co-author Cherie Westbrook of Colorado State University. "Instead, the beaver dams greatly enhance hydrologic processes during the peak-flow and low-flow periods, suggesting that beavers can create and maintain environments suitable for the formation and persistence of wetlands."

It would take a massive natural flood to reach these elevated levels without the help of beavers, the researchers suggest.

The beaver population in Rocky Mountain National Park is currently dwindling—only 30 currently live there, down from an estimated high of 600 in 1940. Further reduction of the population, the authors caution, could harm the hydrologic balance in the river valley and disturb the area's water cycle and soil conditions, which could influence the overall plant and animal diversity of the ecosystem.

The research, which was funded by the U.S. Geological Survey and Rocky Mountain National Park, is detailed in the June 8 issue of the journal Water Resources Research.