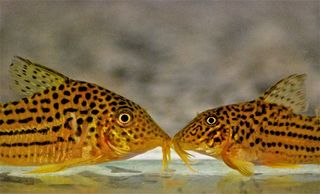 Fashion fads seem to permeate catfish communities, where this South American fish sports matching coloration and patterns depending on its local community. This new finding also suggests that while the communities look alike, they are actually several different species.

The armored catfish in the subfamily Corydoradinae are bottom-dwellers that live off a diet of algae, insects and zooplankton, and they defend themselves with retractable venomous spines and bony plates.

The researchers collected a total of 226 different Corydoradinae individuals and analyzed their DNA sequences. They then created a matrix detailing the color patterns found in the various catfish and another comparing species in terms of geographical distance. The two matrices were then compared to establish the relationship between color and geographical distance. [Image of armored catfish]

For the first time, researchers were able to determine that many species are mimetic, meaning  they evolved to share the same color patterns for mutual benefit. For instance, the color patterns included cryptic features that kept the animals camouflaged, such as spots, counter-shading and eye bars, as well as patterns that served as warning signs to predators. These warning features included strongly contrasting black and white stripes, orange and white patches and conspicuously colored spines, the researchers found.

The research also established that, while each individual community of similar-looking fish comprised species belonging to different genetic lineages, all the catfish had adopted similar color patterns.

"Although appearing identical in terms of color pattern, our in-depth assessments of genetic relationships, diet, body shape and color patterns of the fish revealed that 92 percent of the communities we sampled comprised species that do not compete for resources," said study researcher Markos Alexandrou, a doctoral student at Bangor University.

In the 19th century, Henry Walter Bates was first to discover the phenomenon (called Mullerian mimicry) in butterflies that used color and patterning to serve as a noxious warning to predators. The mimicry is now known in various species, including poison dart frogs and millipedes.

The new discovery in catfish suggests that in many cases the number of Corydoras species may be higher than previously recognized, which would drastically change things for the environmentalists charged with protecting the species, the researchers said.

The research is detailed in the Jan. 6 issue of the journal Nature.