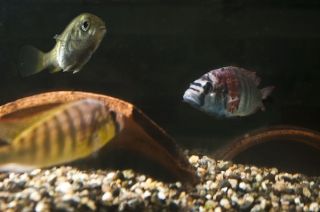 If you're a male African cichlid, it pays to be a brawler. A new study finds that female fish get a reproduction-related charge when their preferred mate wins a fight against another male. When her beau loses a slugfest, the female becomes more anxious.

"It is the same as if a woman were dating a boxer and saw her potential mate get the crap beat out of him really badly," study co-author Julie Desjardins said in a statement. "She may not consciously say to herself, 'Oh, I'm not attracted to this guy anymore because he's a loser,' but her feelings might change anyhow."

Desjardins, a postdoctoral researcher in biology at Stanford University, and her fellow researchers reported their results online Nov. 24 in the journal Proceedings of the National Academy of Sciences.

To find out how female fish react to male fights, the researchers studied 15 female fish, dissecting their brains immediately after each fight.

The researchers used a fish tank split into three compartments by transparent barriers. In each case, two males of comparable size and weight were put into the sections at either end, and the female went into the middle section.

For two days, the fish were given 20 minutes to bond. Typically, this involved the female interacting with whichever male she preferred.

"We know that she prefers a particular male, because she will display some mating behavior and he will try to do the same on his side," Desjardins said.

The female's preference didn't change on the second day, the researchers found.

On the third day, the female remained in the middle section of the tank, but both male fish were put into a section together. Because African cichlids are territorial, it never took long for a fight to erupt.

The researchers separated the fish after 20 minutes of fighting. They then dissected the female's brain, measuring levels of RNA (a molecule similar to DNA) to judge activation in various areas of the brain. The scientists focused on RNA for two genes associated with reproduction. They found that in the females who'd seen their preferred male lose, areas associated with anxiety were extra-active. In females whose potential mates had emerged victorious, activity increased in areas of the brain associated with pleasure and reproduction.

"In this case, she is turning on her body to get ready to physically mate with this male that she previously chose," Desjardins said.

The researchers don't know whether females would still have chosen to mate with a loser male, because the females were dissected immediately after the fight. Examining the effect of fish fights on actual mate choice is the next step, Desjardins said.

"Our intuition is that this response is likely to occur under similar conditions in humans," Fernald said in a statement, "because the brain areas involved are present in all vertebrates and perform comparable functions."