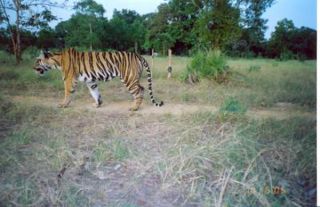 Big cat cameo: This tiger has triggered a camera trap, one of the standard tools for counting the majestic beasts. But some researchers suggest that what the big cats leave behind might work as well as the high-tech cameras.
(Image: © Yadvendradev Jhala.)

According to some estimates, a mere 3,200 tigers live in the wild, and their numbers are quickly dwindling. Keeping tabs on their actual numbers is vital to conservation efforts, but can be a drain on the limited resources available for protecting tigers in the 13 Asian countries where the big cats still roam freely.

Now researchers in India, a country that is home to more than half the world's remaining wild tigers, say they may have developed a highly cost-effective model for conducting a tiger census, and it's all about the number two. Tiger 'number two,' that is.

The technique relies on manpower to search the forests where tigers live for what the researchers call 'tiger signs' — a delicate reference to tiger footprints and tiger poop.

Although the method isn't glamorous or cutting edge, scientists from the Wildlife Institute of India say, if done properly, it's about as accurate as using camera traps, which snap images of tigers that walk into their vicinity, and far cheaper.

"Tiger feces are the size of large beetroot and have a characteristic pungent, musky odor," lead researcher Yadvendradev Jhala said in a statement. "Fresh tiger feces are normally accompanied by urine sprays that smell like well-cooked basmati rice."

A study of the method comes during the world's first Tiger Summit, now under way in Russia, aimed at saving the iconic cats. Political leaders from all 13 countries where tigers live are meeting to develop a workable strategy and find the funding required to save the tigers that still remain.

It's been standard practice for several decades to use the big cats' telltale footprints to monitor the extent of their wanderings, but typically people rely on camera traps to estimate actual population numbers, a practice which, Jhala suggests, is not only costly, but requires lots of trained personnel.

Jhala's team from the Wildlife Institute of India tried both techniques — tallying tigers by their "signs" and using camera traps — for 21 different sites across India, and found both methods arrived at similar numbers for local tiger populations.

But despite the similarity in data, the price for each technique was markedly different. For each site, it cost about $1,200 and took 220 person-days to collect data on paw prints and feces, compared with $17,000 and 720 person-days for camera trapping.

Jhala said the new approach might even be expanded to count other endangered species across vast landscapes.

Ginsberg said that in areas where labor is cheap, the new method can be helpful, but stressed that comprehensive monitoring techniques are of vital importance for conservation efforts, and sometimes worth the cost.

"With 1,000 breeding females left in the world, we better be really careful that we are doing the best for those tigers," Ginsberg told OurAmazingPlanet.

Although habitat loss is pushing tigers to the brink of extinction, in recent years the illegal killing of tigers for their body parts, a hot commodity on a flourishing global black market, is posing a more immediate threat, and Ginsberg said it's important to know which regions are home to the greatest number of breeding tigers, so they can be protected from poachers.

"Without enforcement," Ginsberg said, "you will not have tigers."

Reach Andrea Mustain at amustain@techmedianetwork.comThis e-mail address is being protected from spambots. You need JavaScript enabled to view it . Follow her on Twitter @AndreaMustain.