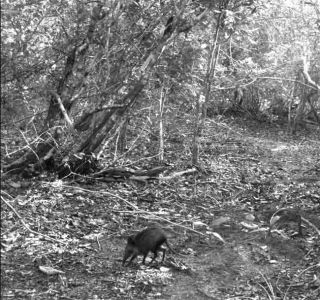 Giant elephant-shrew captured on camera in the forests of Kenya.
(Image: © Zoological Society of London.)

A furry mammal with a trunk-like nose was caught scampering about in a remote African forest. This elephant shrew, a large one, is likely a new species.

Conservationists studying the biodiversity of the Boni-Dodori forest on the coast of northeastern Kenya had set up camera traps there after a scientist had spotted an elephant shrew (also called a sengi) she didn’t recognize.

From the images of the new species, researchers now know the animal has maroon coloring on its sides, shoulders and back, and a lower rump that's jet-black. It's relatively large for an elephant shrew, weighing in at 1.3 pounds (600 grams) with a total length of 22 inches (550 millimeters), and a tail length of about 10 inches (250 mm).

The team, which included the Zoological Society of London (ZSL) and the Kenya Wildlife Service (KWS), will next analyze the animal’s DNA to confirm whether or not it is indeed a new species of elephant shrew.

If it is a new species, that would make 18 species of sengi in the family Macroscelididae (13 species of soft-furred sengi and five species of the giant sengi). All are native to Africa. The animals are more closely related to elephants than shrews, despite being relatively small creatures – ranging from 4 to 12 inches (10 to 30 centimeters) in length and weighing from less than a tenth of a pound to 1.5 pounds (30 to 700 grams).

The peculiar name is a reflection of their long, flexible, trunk-like noses, which they use to search for insect meals. The newly captured animal is a type of giant sengi, which have patterned coats and other distinct features from the smaller sengis.

"With their ancient and often misunderstood ancestry, their monogamous mating strategies, and their charismatic flexible snouts, they are captivating animals," study researcher Galen Rathbun from the California Academy of Sciences said in a statement.

In 2008, Rathbun announced another new species of giant sengi caught in the forests of Tanzania. Its weight gave this animal away: "From the moment I first lifted one of the animals into our photography tent, I knew it must be a new species — not just because of its distinct coloring, but because it was so heavy," Rathbun said in 2008 of that discovery.