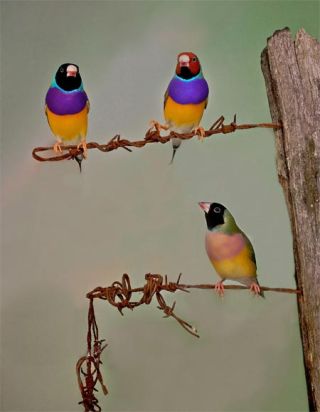 The results show females of a particular finch species can select sperm from the males that are a more ideal genetic match, giving the resulting offspring a better chance at survival.

The findings might explain why these normally monogamous female finches sometimes take multiple mates, a phenomenon known as polyandry.

Polyandrous behavior has obvious benefits for males, because it allows them to pass on more of their genes to offspring. But scientists have been puzzled as to why females would cheat, since bearing offspring has energy costs for the female, and she has a limited number of eggs. Also, if the male finch finds out the female is cheating, he will often abandon her, which is problematic, since both the mother and the father are needed to rear the offspring, said study researcher Sarah Pryke, a behavioral ecologist at Macquarie University in Sydney, Australia.

"What this study has shown is that, if you do cheat on your male, if you are able to do it in such a way that they don't find out … then the benefit can be absolutely huge for the female," Pryke told LiveScience.

The results are published in the Aug. 20 of the journal Science.

Pryke and her colleagues studied Gouldian finches, which include red-headed and black-headed varieties. When the two different types interbreed, their offspring are much more likely to die before reaching adulthood than birds from parents with the same color heads. That's because mates with the same head color are much more genetically compatible than mates of different head colors.

To study the advantages of cheating, the researchers set up several finch love triangles. Each triangle involved a female and two males, all with various combinations of head colors.

First, females were given a "social partner," equivalent to the male that would help rear the offspring in the wild. The two birds were allowed to mate in a cage, and then separated by a barrier. The female was then given the opportunity to mate with an "extra-pair" male for one hour. Afterward, the female and her social partner were reunited.

When it came to the father of their offspring, the finch mothers showed some discretion. Regardless of whether he was the social partner or the extra pair, the male that was the most genetically compatible with the female was the one that fathered most of the offspring.

"Just a little bit of cheating, just one copulation with a compatible male, can have really, really huge adaptive benefits," Pryke said.

So how does the female "select" the right sperm to father the offspring?

"It's a little bit of a black box, what's actually happing inside the female, unfortunately," Pryke said.

Female finches can store sperm in their reproductive tract for 12 to 13 days, Pryke said. Somehow, a selective process occurs that the researchers have yet to pin down. It could be that the sperm from the more compatible male are faster or more efficient at finding their way to the female's egg, Pryke said.