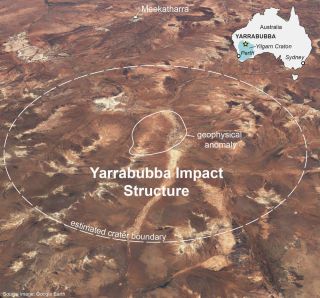 Researchers drew the estimated shape of the vanished Yarrabubba impact crater over this Google Earth image of Western Australia. The structure may be part of the oldest known impact crater on Earth.
(Image: © Google Earth/ The Conversation)

Despite Earth's long history of getting smacked by space rocks, evidence of those collisions can be very hard to find; even the largest impact craters vanish over time due to erosion and tectonic activity, taking the best reminders of Earth's past with them. Now, however, researchers in Western Australia believe they've found the single oldest impact crater ever detected, dating to roughly 2.2 billion years ago.

In a new study published Jan. 21 in the journal Nature Communications, the researchers studied a 45-mile-wide (70 kilometers) impact site in the Australian Outback known as Yarrabubba. Today, all that's visible of the once-enormous crater is a small red hill at the area's center, known as Barlangi Hill. According to the researchers, the minerals inside that hill hold valuable information about the impact's age.

"[Barlangi Hill] has been interpreted as an impact-generated melt rock," the researchers wrote in the new study. That means its rocky innards hold mineral grains that were smashed, melted and eventually recrystallized by the ancient impact. Narrowing down the ages of those crystal inclusions (known as neoblasts) could reveal the date of the impact itself.

To do that, the study authors looked for neoblasts in a sample of grains containing two minerals, monazite and zircon, collected from Barlangi. Using a method called uranium-lead dating — which can reveal a mineral's age based on how many uranium atoms have decayed into lead — the team determined that the crater was formed roughly 2.229 billion years ago, making it 200 million years older than any other known crater on Earth.

If that's accurate, the researchers wrote, then the impact may have coincided with the end of a prehistoric ice age when most of the planet was covered in frost. It's possible, then, that the meteor slammed into a vast ice sheet instead of the desert that stands there today.

"If the impact occurred into an ice sheet then it would release lots of water vapor, which is an even more efficient greenhouse gas than carbon dioxide," lead study author Timmons Erickson, of NASA's Johnson Space Center, told the AFP. "That, in turn, may result in warming of the planet."

This hypothesis relies on a pretty big "if," however, as there is no concrete evidence that this part of Australia was covered in an ice sheet at the time, the researchers acknowledged. Even older impact sites are sure to exist, the team added, and studying those could fill in more gaps in our understanding of the planet's geologic past. Now, it's just a matter of finding them.