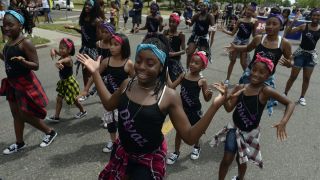 Members of Divaz dance group join participants in the Juneteenth Music Festival and parade on June 17, 2017 in Denver, Colorado. Organizers say that this is one of Denver's longest-running parades, dating back to the 1950s.
(Image: © Photo by Kathryn Scott/The Denver Post via Getty Images)

Juneteenth, an American holiday celebrated on June 19, commemorates the day in 1865 when the Emancipation Proclamation — the federal order ending slavery in the United States — was read to enslaved African Americans in Texas.

On that day, Union troops led by Maj. Gen. Gordon Granger arrived in Texas, where he announced the end of the Civil War and the abolition of slavery nationwide. The war had ended just two months earlier, when Confederate Gen. Robert E. Lee surrendered on April 9, 1865; and it had been two years and nearly six months since the proclamation ending slavery was signed by President Abraham Lincoln, on Jan. 1, 1863.

However, Confederate states that were still in open rebellion against the federal government in 1863 didn't recognize President Lincoln's authority, and many slaveholders didn't comply with the order until Union troops arrived to enforce it, according to the Smithsonian National Museum of African American History and Culture (NMAAHC).

After learning they were free, formerly enslaved African Americans in Texas adopted June 19, nicknamed Juneteenth, as a day to celebrate freedom. In the following decades, the holiday — also known as Emancipation Day and Black Independence Day — was embraced by African American people across the country, the NMAAHC says.

Related: 4 myths about the history of American slavery

On June 19, 1865, Maj. Gen. Granger read from Lincoln's General Order Number Three to people in Galveston, Texas, one of the busiest port cities in the U.S. at the time. The document declared that "the people of Texas are informed that in accordance with a Proclamation from the Executive of the United States, all slaves are free. This involves an absolute equality of rights and rights of property between former masters and slaves, and the connection heretofore existing between them became that between employer and free laborer," according to the Obama White House Archives.

It's likely that many Texan slaveholders and enslaved people already knew about Lincoln's order when it became a law two years earlier, but without Union troops to enforce it, slave ownership in Texas "was business as usual" into 1865, said Michael Hurd, director of the Texas Institute for the Preservation of History and Culture at Prairie View A&M University in Prairie View, Texas.

During that two-year window, "Texas was considered a safe haven to practice slavery," and slaves who were brought to Texas from other states helped to spread the word among enslaved African Americans about emancipation elsewhere in the failing Confederacy, Hurd told Live Science.

"I think a lot of people, Black and White, knew about the emancipation," Hurd said. "But the people in power — slave owners — made no effort to free their slaves until they absolutely had to, when the Union troops came through."

Some formerly enslaved people who left Texas for Mexico after the Civil War brought the holiday with them, where it is still observed today, said Kelly Navies, a Museum Specialist in Oral History for the NMAAHC.

"You will find it celebrated on June 19th in some parts of northern Mexico, as el Día de los Negros," Navies told Live Science.

African Americans observed Juneteenth with feasting, music, pageants and parades, with many dressing in fine clothes — a luxury denied when they were enslaved. But the holiday was also an opportunity to hold political rallies so that newly freed African Americans could learn about voting rights, according to the Texas State Historical Association.

A newspaper article from Austin, Texas, in 1869 described that year's Juneteenth celebration, mentioning a procession led by a parade marshal through local barbecue grounds, said Daina Ramey Berry, a Radkey Professor of History at the University of Texas at Austin.

"They had drummers; a flag bearer; they were holding the Stars and Stripes. Many of the men on horses were decorated with bright-colored ribbons," Berry told Live Science. The article went on to say that participants "felt the importance and knew the day they celebrated was one to be held in remembrance by them and their children," she said.

Many of the first Juneteenth celebrations were also oral history events during which speakers would talk about the institution of slavery and how African Americans survived, Berry explained.

"In the early festivals in the 1860s and 1870s, when you had formerly enslaved people still alive, those elders would speak at these ceremonies and educate the young generations," she said. "It's like a public oral history lesson, where the community is learning about a difficult part of our history, but it is a part of our history that needs to be acknowledged."

And unlike the Fourth of July, America's national celebration of independence from British rule, Juneteenth commemorates freedom for all in America, Berry said. Frederick Douglass, the renowned African American writer and orator, delivered a keynote address at an Independence Day celebration in 1852, now known as "What to the Slave, Is the Fourth of July?" (it was formerly titled "The Meaning of July Fourth for the Negro"). In it, Douglass called out the hypocrisy of declaring a holiday devoted to freedom, in a land where approximately 4 million African Americans were not free.

From the perspective of enslaved people, "your celebration is a sham; your boasted liberty, an unholy license; your national greatness, swelling vanity; your sounds of rejoicing are empty and heartless," Douglass wrote. For African Americans who embraced Juneteenth, the holiday "represents the Independence Day that they want to honor and celebrate," said Berry.

Juneteenth across the U.S.

During the 1920s and the decades that followed, millions of African Americans left the South and moved to cities in northern and western states, in what is known as the Great Migration — and the celebration of Juneteenth traveled with them. "Because of that, you started to see those celebrations grow in communities around the country," Hurd said.

Interest in Juneteenth surged again in the 1950s and 1960s, spurred by the activism of the Civil Rights movement. One event in particular, the Poor People's Campaign of 1968, brought a diverse group of activists from across the country to Washington, D.C., to advocate for the rights of the poor, Navies explained. On the last day of the event — June 19 — the activists celebrated Juneteenth together.

"And from there, when the activists returned home, a lot of them took the idea of Juneteenth home with them, and we do see it gaining a lot of interest after that date," Navies said.

In 1979, the state of Texas passed a bill declaring June 19, "Emancipation Day in Texas," making it a legal state holiday starting in 1980, according to the Texas State Library and Archives Commission. Other states followed, and today, Juneteenth is recognized in 47 states and the District of Columbia (exceptions are Hawaii, North Dakota and South Dakota, according to a report issued June 3, 2020 by the Congressional Research Service).

Then, in 2018, the U.S. Senate passed a resolution to establish "Juneteenth Independence Day" as a national holiday; the resolution has not yet received approval from the House of Representatives, CNN reported in 2019.

Gaining federal recognition for Juneteenth "would mean that we're starting to come to terms with some of the important lessons of that time period of slavery and reconstruction that we've had a hard time as a nation confronting," Navies said.

"Juneteenth forces you to look at what the meaning of enslavement was, and what the meaning of being free means to African Americans today, and to 4 million African Americans at that time," she said. "It's a day where you're not just celebrating — you're reflecting on what's happened since the year 1865. If we collectively as a nation were to acknowledge that, I think it would really be a step in the right direction toward healing."