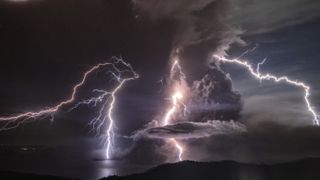 A column of ash surrounds the crater of Taal Volcano as it erupts on Jan. 12, 2020, with lightning in the background, as seen from Tagaytay city, in the Philippines.
(Image: © Ezra Acayan/Getty Images)

A volcano in a densely populated part of the Philippines has started to belch clouds of ash and streams of molten rock — and scientists are worried it could soon erupt even more violently, putting almost a million people at risk.

Another "imminent hazardous eruption" could happen "within hours or days," according to the Philippines Institute of Volcanology and Seismology (Phivolcs), which is monitoring the volcano on the island of Luzon, reported The Manila Times.

The Taal volcano, located about 40 miles (65 kilometers) south of the Philippines capital, Manila, began erupting on Sunday (Jan. 12), when it launched a column of ash and smoke up to 9 miles (14 km) high. The dark, towering column from the volcano was also filled with flashes of lightning and thunder.

Related: The 10 Most Hazardous Countries for Volcanoes (Photos)

Before dawn today (Jan. 13), the volcano started spewing a "fountain" of molten lava from vents in its central crater, according to the Times. "The volcano is sort of a volcano within a volcano," explained volcanologist Greg Valentine from the State University at Buffalo in New York. "It's on an island in a lake that is partly filling a larger caldera [an older crater that has partly collapsed]." (Live Science previously reported that this island-volcano lost its designation as the world's largest island-in-a-lake-on-an-island-in-a-lake-on-an-island.)

An exclusion zone with an 8.5-mile (14 km) radius is being enforced around the erupting volcano, and Phivolcs has requested the evacuation of a danger zone with a 10.5-mile (17 km) radius, an area that is home to more than 900,000 people, the BBC reported.

The area has also been shaken by dozens of intense earthquakes in the last few days, and volcanologists have warned of the dangers of a "volcanic tsunami" in the lake — a huge wave triggered by either earthquakes or falling debris.

The Taal volcano is relatively small by the standards of volcanoes, but Valentine told Live Science that Taal is one of the most active volcanoes in the Philippines. In the 1960s, eruptions at the Taal volcano revolutionized the scientific understanding of a certain type of explosive volcanic eruption, called a pyroclastic surge, he said.

"These are flows of ash and gas that, instead of going to high up in the atmosphere, they flow along the ground — sort of like superintense dust storms," Valentine said. "They just strip everything in their path, so they are quite devastating."

Pyroclastic surges and the dangers of volcanic ash raining down throughout the region are a greater danger than lava from the volcano, he said.

If the eruptions become larger, they could even affect Manila indirectly, as volcanic ash could fall on electrical distribution networks or disrupt air travel, Valentine said. The ash could also lead to respiratory issues among Manila residents.

More than 50 active volcanoes are found on the islands of the Philippines, a consequence of the islands' location on the edges of the tectonic plates of the Pacific Ring of Fire.

"There's a section of ocean crust that is going underneath the Philippines islands, and that causes melting of rock down deep," Valentine said. "Ultimately, that results in volcanoes on the surface."