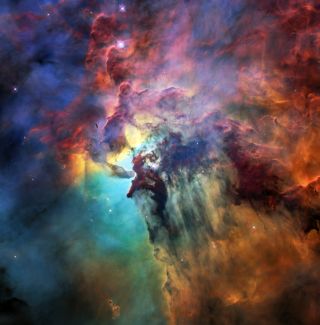 A Hubble Space Telescope image shows the Lagoon Nebula, part of the small portion of matter in the Milky Way that isn't made of dark matter.
(Image: © NASA)

The Milky Way may be missing a strange X-ray glow long associated with dark matter in other galaxies, a new study has found. If this glowing halo is really missing — and physicists not involved in the study are highly skeptical it’s truly absent — it would deal a blow to the theory that dark matter is made up of hypothetical "sterile neutrinos." Sterile neutrinos are theoretical ghostly cousins of the faint subatomic neutrinos scientists have already discovered, and may or may not exist.

The researchers of the new study, which was published March 27 in the journal Science, looked for this glowing halo in a slightly different way from past attempts, something that is the biggest point of contention among other physicists.

"From a science perspective, I think the fact that we're getting a lot of pushback — and a lot of interest — in our work, is the way that science should be operating," said study co-author Nicholas Rodd, a University of California, Berkeley astrophysicist. "People have been thinking about how to search for these neutrinos with X-rays for some time. We came in and really had a new idea of how to look for them. And any time someone comes in and says, 'I have a new idea for how to look for something that's different from what you are doing,' your gut instinct should be skepticism. I think it is totally the natural response."

What’s energy resolution got to do with it?

Dark matter is the biggest unknown in the universe. Scientists know it's there, primarily because they can see the effects of its gravity in galaxies; the known stars and gases aren't nearly heavy enough to bind galaxies together. So, astrophysicists believe that galaxies have unseen "halos" of dark matter providing the missing bulk, and collectively account for 85% of the mass of the universe. (There are other sorts of evidence for dark matter out there, but this is the big one.) They don't, however, know what this mystery matter is made of.

Some theories involve relatively heavy speculative particles, called WIMPS. Others involve ultralight particles called axions. There are even exotic, not-widely-accepted theories that rely on the existence of tiny black holes. But the one that is simplest, in certain respects, involves just slightly tweaking physicists’ model of neutrinos — the ultra-light particles that stream through space, interacting only very weakly with other particles. Right now, there are three known kinds of neutrinos: electron neutrinos, muon neutrinos and tau neutrinos. But some particle physicists suspect that there's a fourth variety: the sterile neutrino. This heavier neutrino wouldn't interact with other particles at all, except through gravity and when it decays. And because of its added bulk, it doesn't move through space quite as speedily as other neutrinos. That means that sterile neutrinos don't fly apart from each other but form clouds, suggesting that they might be able to form halos like dark matter does.

There’s one important difference between sterile neutrinos and other dark matter candidates: Over time, sterile neutrinos decay into particles we know about, including X-ray photons. Researchers in the 1990s and early 2000s suggested that decaying halos of sterile neutrinos would produce a faint glow at a particular wavelength on the X-ray spectrum. And in 2014, adding together X-ray light detected from 73 different galaxy clusters, a team of Harvard researchers seemed to find such a glow right in the expected range: a faint spike of X-ray light at an energy level of 3.5 kilo-electron volts (keV is a measure of the energy level of the particles producing the light).

Dozens of follow-up studies have since detected similar 3.5 keV glows (referred to as the 3.5 keV line) in other groups of galaxies, though at least some searches for the line — particularly in the Draco galaxy — have turned up empty.

But the researchers of the new  paper argue that the 3.5 keV line is missing from the brightest, closest dark matter source of all: our home galaxy. A team from the University of Michigan, UC Berkeley, and the Lawrence Berkeley National Laboratory went through old X-ray telescope recordings and picked out X-ray images of "blank sky" — regions of the Milky Way that have no stars but should still host dark matter.

Their large dataset should have included a 3.5 keV line if that line is really a dark matter signal, they argued. The team is relatively certain the Milky Way has dark matter. And it's so close and covers so much of our sky that the dark matter should definitely show up in their data if it's, they wrote -- for the same reason that it's much easier to spot a large lightbulb in your bedroom than a tiny LED miles away. This strongly suggests, they argued, that the 3.5 keV line is not a dark matter signal, which would be a major blow for the sterile neutrino theory.

Not everyone, however, is convinced.

Kevork Abazajian, an expert in the 3.5 keV line and director of the Center for Cosmology at the University of California, Irvine, who has been a critic of the paper since a draft first circulated in February 2019, said "The main problem is that they use methods that aren't used in the X-ray astronomy community, and there are reasons those methods aren't used in the X-ray astronomy community."

The new study relies on a lot of data — a cumulative 8,300 hours of telescope observation time — but that data comes from a very narrow range of frequencies: between 3.3 and 3.8 keV. And the "energy resolution" of the data is about 0.1 keV, meaning that the researchers can clearly distinguish only a handful of frequencies in their dataset. Their dataset is a bit like a 5-pixel-wide photograph taken with a super-precise camera: The quality of the image is very good, but it doesn't show much.

The authors of the paper say that's fine. Even though the image has a low energy resolution, the 3.5 keV line should still show up clearly right in the middle of it. And because it doesn't, that suggests the line is not in the Milky Way at all, they contend.

"Because we are not X-ray astronomers by training, we brought in statistical methods that are used in other fields, and we think are more rigorous and robust," Rodd said.

Those methods, which are drawn from gamma-ray astronomy and certain kinds of particle physics practiced at the Large Hadron Collider in Europe, appeal to the authors of the paper. But X-ray astronomers are more skeptical.

Abazajian told Live Science that using such a narrow energy range amounts to "cherry picking" the data which can lead to an untrustworthy result.

The problem, he said, is that if the line is present, it wouldn't look like a bright spot against a dark background. Instead, there's lots of background X-ray light — from other galaxies, from atoms scattered across the sky, and even a little bit from cosmic rays that cause X-ray flickers inside the telescope itself — that you have to deeply understand and carefully subtract out of the data before a noticeable line appears.

In particular, he said, three other X-ray sources fall within the narrow band that the researchers studied: atoms of argon-18 and sulfur-16 in the sky, and then another source that might come from inside the telescopes known as potassium kα. But the broader problem, he said, is that by studying such a narrow frequency range, the researchers just can't understand the background well enough to properly subtract it out.

Rodd had the opposite take: that accounting for too much of the X-ray spectrum means including features that aren't relevant the 3.5 keV line, and that might distort your model of what the background X-ray radiation of the Milky Way looks like. That makes it difficult to properly disentangle the 3.5 keV line from the background, he argued.

In another paper, not yet published in a peer-reviewed journal but released as a preprint in February 2019, a different group of researchers  — expert X-ray astronomers — accounted for a wider swath of the X-ray spectrum. Using more widely-accepted techniques, they looked for the 3.5 keV line in the Milky Way. And they found it.

"The main complaint that I've heard [about the new study] is that they are [looking] too narrowly, and therefore what's happening is they're actually capturing some of the [3.5 keV] signal itself, which they are then calling background," said Tim Tait, chair of the Department of Physics and Astronomy at the University of California Irvine, who was not involved with either study.

Tait, a particle physicist with expertise in dark matter who doesn't typically work with X-rays, is a bit of a knowledgeable bystander to the disagreement, and not as sharp a critic of the paper as Abazajian.

"They're very careful in their work, and as far as their analysis goes, I don't see anything that's wrong. But I really would like to see a wider range of frequencies plotted just to see what's going on with the data," he said,

Tait added that he was surprised that the new paper didn't engage directly with the February 2019 preprint that found different results.

Despite the skepticism, Rodd says he’s reasonably convinced that his team has shown that the 3.5 keV line is not sterile neutrino dark matter — though he said that raíses the question of what is producing the line in the galaxies in which it has been detected.

Part of the underlying problem is that the quality of available X-ray data from the empty regions of the sky aren't as good as scientists would like them to be. Current X-ray telescopes just don't have the energy resolution ideal for  for this sort of research, Rodd said. A Japanese satellite telescope that might have fixed that problem, known as Hitomi, lost contact with Earth soon after its 2016 launch. And there are no firm plans to launch any comparable instruments into space, where X-ray astronomy is clearest, until at least the late 2020s.

Until then, these researchers will be left waiting, wondering, and disagreeing -- and waiting for the higher-quality data that could resolve the controversy once and for all.