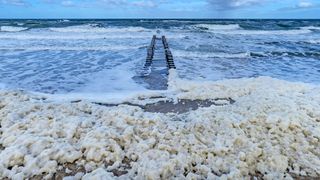 The sea served up an unusual jiggly blob to the Spanish city of Tossa de Mar on Jan. 21, but it wasn't a gigantic mess of gray custard or a frothy mix of dirty frosting.

A powerful winter storm, dubbed Gloria, brought snow, rain, high waves and strong winds to the coastal town, which is about 55 miles (90 kilometers) northeast of Barcelona. But why the hearty dollop of sea-foam?

"Sea-foam forms in this way — but on a much grander scale — when the ocean is agitated by wind and waves," according to the National Ocean Service.

Essentially, sea-foam forms when water, air bubbles and a surfactant — a sticky molecule that grabs onto water and air molecules — gets churned into a fluffy wet lather, according to a 2011 study in the journal Water Research. That surfactant can come from pollutants, but it can also result from natural causes, including decaying algal blooms.

Usually, sea-foams aren't dangerous to humans. But it's best to stay away from foams caused by harmful algal blooms. For instance, when the bubbles burst from foams made of the algae Karenia brevis — which produces neurotoxins — the toxins can become airborne, meaning that people might breathe them in or get them in their eyes, the National Ocean Service reported.

Moreover, foams can be dangerous for seabirds. After massive seabird die-offs in California in 2007 and in the Pacific Northwest in 2009, researchers found that the soap-like foam from a decaying Akashiwo sanguinea algae bloom was to blame. The sea-foam from these algal blooms destroyed the birds' ability to waterproof their feathers, making it nearly impossible for them to fly. It also meant that the birds couldn't fluff out their feathers for insulation, and many of them died from hypothermia, according to the National Ocean Service.

It's unclear what exactly caused the crazy amount of sea-foam in Tossa de Mar.

However, the city's authorities announced that the foam didn't pose a risk to people, according to Fox News. More dangerous was the storm Gloria, which caused flooding associated with the deaths of seven people as of Jan. 22, Fox News reported.