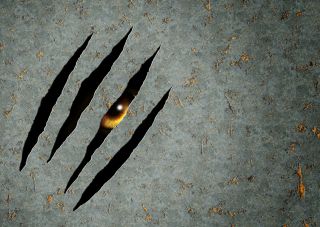 In 1855, the Brooklyn Daily Eagle reported on the gruesome murder of a bride by her new husband. The story came from the French countryside, where the woman's parents had initially prevented the couple's engagement "on account of the strangeness of conduct sometimes observed in the young man," although he "otherwise was a most eli[g]ible match."

The parents eventually consented, and the marriage took place. Shortly after the newlyweds withdrew to consummate their bond, "fearful shrieks" came from their quarters. People quickly arrived to find "the poor girl… in the agonies of death — her bosom torn open and lacerated in a most horrible manner, and the wretched husband in a fit of raving madness and covered with blood, having actually devoured a portion of the unfortunate girl's breast."

The bride died a short time later. Her husband, after "a most violent resistance," also expired.

What could have caused this horrifying incident? "It was then recollected, in answer to searching questions by a physician," that the groom had previously "been bitten by a strange dog." The passage of madness from dog to human seemed like the only possible reason for the grisly turn of events.

The Eagle described the episode matter-of-factly as "a sad and distressing case of hydrophobia," or, in today's parlance, rabies.

But the account read like a Gothic horror story. It was essentially a werewolf narrative: The mad dog's bite caused a hideous metamorphosis, which transformed its human victim into a nefarious monster whose vicious sexual impulses led to obscene and loathsome violence.

My new book, "Mad Dogs and Other New Yorkers: Rabies, Medicine, and Society in an American Metropolis, 1840-1920," explores the hidden meanings behind the ways people talked about rabies. Variants of the rabid groom story had been told and retold in English language newspapers in North America since at least the beginning of the 18th century, and they continued to appear as late as the 1890s.

The Eagle's account was, in essence, a folk tale about mad dogs and the thin dividing line between human and animal. Rabies created fear because it was a disease that seemed able to turn people into raging beasts.

A terrifying and fatal disease

The historian Eugen Weber once observed that French peasants in the 19th century feared "above all wolves, mad dogs, and fire." Canine madness — or the disease that we know today as rabies — conjured up the canine terrors that have formed the stuff of nightmares for centuries.

Other infectious diseases — including cholera, typhoid and diphtheria — killed far more people in the 19th and early 20th centuries. The cry of "Mad dog!" nonetheless sparked an immediate sense of terror, because a simple dog bite could mean a protracted ordeal of grueling symptoms, followed by certain death.

Modern medicine knows that rabies is caused by a virus. Once it enters the body, it travels to the brain via the nervous system. The typical lag time of weeks or months between initial exposure and onset of symptoms means that rabies is no longer a death sentence if a patient quickly receives injections of immune antibodies and vaccine, in order to build immunity soon after encountering a suspect animal. Though it's rare for people to die of rabies in the U.S., the disease still kills tens of thousands of people globally every year.

According to 19th-century sources, after an incubation period of between four and 12 weeks, symptoms might start with a vague sense of agitation or restlessness. They then progressed to the wracking spasmodic episodes characteristic of rabies, along with sleeplessness, excitability, feverishness, rapid pulse, drooling and labored breathing. Victims not infrequently exhibited hallucinations or other mental disruptions as well.

Efforts to mitigate violent outbursts with drugs often failed, and physicians could then do little more than stand by and bear witness. Final release came only after the disease ran its inevitably fatal course, usually over a period of two to four days. Even today, rabies remains essentially incurable once clinical signs appear.

Centuries ago, the loss of bodily control and rationality triggered by rabies seemed like an assault on victims' basic humanity. From a real dreaded disease transmitted by animals emerged spine-tingling visions of supernatural forces that transferred malevolent animals' powers and turned people into monsters.

Bites that transform people into animals

Nineteenth-century American accounts never invoked the supernatural directly. But descriptions of symptoms indicated unspoken assumptions about how the disease transmitted the biting animal's essence to the suffering human.

Traditional preventive measures also showed how Americans quietly assumed a blurred boundary between humanity and animality. Folk remedies held that dog-bite victims could protect themselves from rabies by killing the dog that had already bitten them, or applying the offending dog's hair to the wound, or cutting off its tail.

Such preventatives implied a need to cut an invisible, supernatural tie between a dangerous animal and its human prey.

Sometimes the disease left eerie traces. When a Brooklynite died from rabies in 1886, the New York Herald recorded a freakish occurence: Within minutes after the man's last breath, "the bluish ring on his hand — the mark of the Newfoundland's fatal bite…disappeared." Only death broke the mad dog's pernicious hold.

It's possible that, along with werewolves, vampire stories also originated from rabies.

Physician Juan Gómez-Alonso has pointed out a resonance between vampirism and rabies in the hair-raising symptoms of the disease — the distorted sounds, exaggerated facial appearances, restlessness and sometimes wild and aggressive behaviors that made sufferers seem more monstrous than human.

Extreme oversensitivity to stimuli, which set off the tortuous spasmodic episodes associated with rabies, could have a particularly strange effect. A glance at a mirror might set off a violent response, in a chilling parallel with the living-dead vampire's inability to cast a reflection.

Moreover, in different eastern European folkloric traditions, vampires turned themselves not into bats, but into wolves or dogs, the key vectors of rabies.

So as aspiring werewolves, vampires and other haunts take to the streets for Halloween, remember that beneath the annual ritual of candy and costumed fun lie the darker recesses of the imagination. Here animals, disease and fear intermingle, and monsters materialize at the crossover point between animality and humanity.