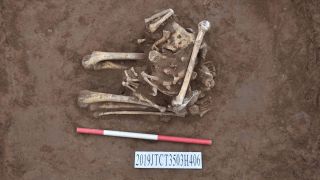 Thousands of years ago in ancient China, a ritual decapitation left the headless remains of a person on their knees at the bottom of a pit.

Researchers recently uncovered the still-kneeling skeleton at a site in central China's Henan province; they estimated that the person was sacrificed around the time of the late Shang Dynasty (1600 B.C. to 1046 B.C.), Chinese news agency Xinhua Net reported on April 16.

The skeleton was aligned facing north, with its hands crossed and secured in front of the body, Xinhua Net reported.

In 2019, archaeologists began digging up the Chaizhuang site, which is thought to cover approximately 0.1 square miles (0.2 square kilometers). To date, nearly 65,000 square feet (6,000 square meters) have been excavated, revealing: remnants of fireworks; artifacts carved from mussel shells and jade; pottery and bones; and large structures such as roads, wells and houses, according to Xinhua Net.

Previous archaeological discoveries hint that ritual human sacrifice was common in China during the Shang Dynasty. More than 13,000 people were sacrificed in the Shang capital city of Yinxu over a span of about 200 years, and sometimes dozens of people were ritually slaughtered at once, Live Science previously reported. In one case, at least 339 bodies were found in a single sacrificial pit.

Details of human sacrifices during this period were recorded as carvings on artifacts known as oracle bones. These flat pieces of animal bone or turtle shell bear the earliest evidence of writing in China; after questions were carved on the oracle bones, they were heated with metal sticks until they cracked. Diviners would then interpret the patterns in the cracks to find answers to their questions, according to the British Library.

One such relic from Chaizhuang held an inscribed glyph — "Kan" — that researchers recognized from another site in Yinxu; the character described a method of placing humans and animals in a pit in an upright posture in preparation for sacrifice, and may reference the newly discovered kneeling, headless skeleton, China News reported.

Most of the skeletons linked to ancient ritual sacrifice in China have been found lying down in burial pits. The discovery of a kneeling victim in combination with a glyph describing upright placement of sacrifices, suggests that this kneeling burial posture was likely more common in ancient China than previously thought, according to China Daily.