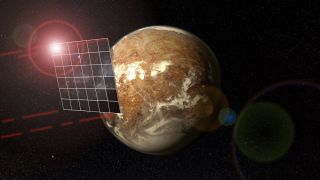 Interstellar space travel. Fantasy of every five-year-old kid within us. Staple of science fiction serials. Boldly going where nobody has gone before in a really fantastic way. As we grow ever more advanced with our rockets and space probes, the question arises: could we ever hope to colonize the stars? Or, barring that far-flung dream, can we at least send space probes to alien planets, letting them tell us what they see?

The truth is that interstellar travel and exploration is technically possible. There's no law of physics that outright forbids it. But that doesn't necessarily make it easy, and it certainly doesn't mean we'll achieve it in our lifetimes, let alone this century. Interstellar space travel is a real pain in the neck.

If you're sufficiently patient, then we've already achieved interstellar exploration status. We have several spacecraft on escape trajectories, meaning they're leaving the solar system and they are never coming back. NASA's Pioneer missions, the Voyager missions, and most recently New Horizons have all started their long outward journeys. The Voyagers especially are now considered outside the solar system, as defined as the region where the solar wind emanating from the sun gives way to general galactic background particles and dust.

So, great; we have interstellar space probes currently in operation. Except the problem is that they're going nowhere really fast. Each one of these intrepid interstellar explorers is traveling at tens of thousands of miles per hour, which sounds pretty fast. They're not headed in the direction of any particular star, because their missions were designed to explore planets inside the solar system. But if any of these spacecraft were headed to our nearest neighbor, Proxima Centauri, just barely 4 light-years away, they would reach it in about 80,000 years.

I don't know about you, but I don't think NASA budgets for those kinds of timelines. Also, by the time these probes reach anywhere halfway interesting, their nuclear batteries will be long dead, and just be useless hunks of metal hurtling through the void. Which is a sort of success, if you think about it: It's not like our ancestors were able to accomplish such feats as tossing random junk between the stars, but it's probably also not exactly what you imagined interstellar space travel to be like.

To make interstellar spaceflight more reasonable, a probe has to go really fast. On the order of at least one-tenth the speed of light. At that speed, spacecraft could reach Proxima Centauri in a handful of decades, and send back pictures a few years later, well within a human lifetime. Is it really so unreasonable to ask that the same person who starts the mission gets to finish it?

Going these speeds requires a tremendous amount of energy. One option is to contain that energy onboard the spacecraft as fuel. But if that's the case, the extra fuel adds mass, which makes it even harder to propel it up to those speeds. There are designs and sketches for nuclear-powered spacecraft that try to accomplish just this, but unless we want to start building thousands upon thousands of nuclear bombs just to put inside a rocket, we need to come up with other ideas.

Perhaps one of the most promising ideas is to keep the energy source of the spacecraft fixed and somehow transport that energy to the spacecraft as it travels. One way to do this is with lasers. Radiation is good at transporting energy from one place to another, especially over the vast distances of space. The spacecraft can then capture this energy and propel itself forward.

This is the basic idea behind the Breakthrough Starshot project, which aims to design a spacecraft capable of reaching the nearest stars in a matter of decades. In the simplest outline of this project, a giant laser on the order of 100 gigawatts shoots at an Earth-orbiting spacecraft. That spacecraft has a large solar sail that is incredibly reflective. The laser bounces off of that sail, giving momentum to the spacecraft. The thing is, a 100-gigawatt laser only has the force of a heavy backpack. You didn't read that incorrectly. If we were to shoot this laser at the spacecraft for about 10 minutes, in order to reach one-tenth the speed of light, the spacecraft can weigh no more than a gram.

That's the mass of a paper clip.

A spaceship for ants

This is where the rubber meets the interstellar road when it comes to making spacecraft travel the required speeds. The laser itself, at 100 gigawatts, is more powerful than any laser we've ever designed by many orders of magnitude. To give you a sense of scale, 100 gigawatts is the entire capacity of every single nuclear power plant operating in the United States combined.

And the spacecraft, which has to have a mass no more than a paper clip, must include a camera, computer, power source, circuitry, a shell, an antenna for communicating back home and the entire lightsail itself.

That lightsail must be almost perfectly reflective. If it absorbs even a tiny fraction of that incoming laser radiation it will convert that energy to heat instead of momentum. At 100 gigawatts, that means straight-up melting, which is generally considered not good for spacecraft.

Once accelerated to one-tenth the speed of light, the real journey begins. For 40 years, this little spacecraft will have to withstand the trials and travails of interstellar space. It will be impacted by dust grains at that enormous velocity. And while the dust is very tiny, at those speeds motes can do incredible damage. Cosmic rays, which are high-energy particles emitted by everything from the sun to distant supernova, can mess with the delicate circuitry inside. The spacecraft will be bombarded by these cosmic rays non-stop as soon as the journey begins.

Is Breakthrough Starshot possible? In principle, yes. Like I said above, there's no law of physics that prevents any of this from becoming reality. But that doesn't make it easy or even probable or plausible or even feasible using our current levels of technology (or reasonable projections into the near future of our technology). Can we really make a spacecraft that small and light? Can we really make a laser that powerful? Can a mission like this actually survive the challenges of deep space?

The answer isn't yes or no. The real question is this: are we willing to spend enough money to find out if it's possible?

Learn more by listening to the episode "Is interstellar travel possible?" on the Ask A Spaceman podcast, available on iTunes and on the Web at http://www.askaspaceman.com. Thanks to @infirmus, Amber D., neo, and Alex V. for the questions that led to this piece! Ask your own question on Twitter using #AskASpaceman or by following Paul @PaulMattSutter and facebook.com/PaulMattSutter.